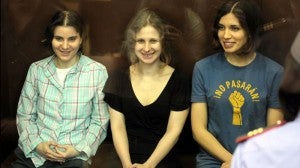 GENEVA—Pussy Riot icon Nadezhda Tolokonnikova is behind bars, but her husband is unbowed, saying the punk band’s controversial case has exposed the weaknesses in Russian President Vladimir Putin’s rule.

Visiting Geneva for a gathering of human rights campaigners, Pyotr Verzilov said that the Kremlin’s tough handling of its opponents shows, paradoxically, that Putin is no longer the strongman he’s made out to be.

“Putin has been managing the country, in the last two years at least, very, very ineffectively,” Verzilov told Agence France-Presse in an interview.

“So this allows us optimism for change,” insisted the slight 26-year-old, a member of the Voina (War) art collective affiliated with Pussy Riot.

Tolokonnikova and bandmate Maria Alyokhina are serving two-year sentences in prison camps over a protest against Putin in Moscow’s cathedral last year.

They and fellow Pussy Riot member Yekaterina Samutsevich were sentenced in August 2012 for hooliganism motivated by religious hatred for singing an anti-Putin “punk prayer”.

Samutsevich was freed on appeal with a suspended sentence in October after a court ruled that guards grabbed her before she could take part in the stunt.

Verzilov said the cathedral was chosen because the Russian Orthodox Church leadership “broke the line” between religion and the state by backing Putin politically.

“We want Russia to be a country integrated into Western culture, the Western legal system, and to share Western values. In this context, it’s absolutely unacceptable when people get jail sentences on the grounds of not paying enough respect to one’s religious views.”

The Pussy Riot arrests heralded a rise in the number of cases involving Kremlin opponents.

“Putin’s decided to gradually tighten Russia’s political system, month by month. The girls were the first victims of this policy,” said Verzilov.

“We’ve seen up to 20 arrests in the year since they were arrested,” he noted, reeling off names including anti-corruption campaigner Alexei Navalny and leftist Sergei Udaltsov.

“We don’t have Article 58 for anti-Soviet activities like under Stalin,” Verzilov said, referring to a broad-brush law deployed by the defunct communist.

“But basically, a considerable number of people who play an active role in Russia’s opposition have criminal cases opened against them. If there’s even a small chance for prosecutors to open a case against you, they do it,” he explained.

But the Pussy Riot case makes it ever-harder to use that tool against Putin’s opponents, thanks to massive global media attention which took Pussy Riot and their supporters by surprise, he said.

“The attention has been so huge that basically there is no danger of it coming off the radar and off the list of things that shape the image of present-day Russia,” he underlined.

“People see this as a clear-cut Putinist monstrosity. The government is sometimes able to convince people that this opponent is just another criminal, another man not paying his taxes, another man throwing a stone at a police officer. But not in this case”.

Verzilov said that he and Tolokonnikova, 23, always knew the risks posed by a brand of direct action mixing music, art and politics.

“In Russia, it often happens that personal stories become political,” he said.

“Me and Nadezhda, we’ve been doing this type of thing for many years. So, basically, everything that’s happened, it’s like a political story.”

Tolokonnikova is serving her time in the central region of Mordovia, some 600 kilometers (370 miles) east of Moscow and known for its network of camps dating back to the Soviet era.

The couple are allowed daily 15-minute phone calls and can exchange of censored messages via the camp’s email service.

Every three months, inmates’ husbands are allowed to spend three days inside the prison with their wives, and can make a four-hour visit every two months.

“There are chances for considerable contact. That helps,” said Verzilov, saying he planned to take the couple’s five-year-old daughter on his next trip.

Read Next
Pugad Baboy, February 20, 2013
EDITORS' PICK
Every Filipino home can now be a smart home with realme TechLife
PLDT Home Prepaid WiFi customers now under the care of Smart
Nestlé Philippines’ ‘NESCAFÉ Plan’ bags Grand Anvil at PRSP 56th Anvil Awards
Wesley So officially a US citizen
‘Pilgrim of peace’ Pope Francis heads to war-scarred Iraq
WHO: Arrival of vaccines in PH ‘a powerful step’ towards economic recovery, normalcy
MOST READ
Kris Aquino dispels rumors on son Josh getting married, thanks Ogie Diaz for defending him
LTO’s P500-M deal for screws draws scrutiny
Wesley So officially a US citizen
Ginebra trades Slaughter to NorthPort for Standhardinger
Don't miss out on the latest news and information.