Kapuso child star a diabetic at 8 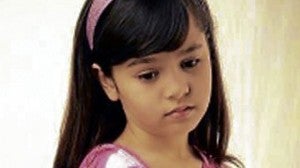 MONA LOUISE Rey cries on cue, but off-cam, she is really a cheerful girl.

Child star Mona Louise Rey, a juvenile diabetic, admits she once asked God why He was making her suffer.

Mona, 8, youngest of four siblings, is the only one in her family diagnosed with the illness. “I’m used to it now, and I can inject myself with insulin,” she told the Inquirer recently. “I can’t eat candies, chocolates and white rice, or drink juices and soda. I’m allowed very little servings of brown rice.”

Her blood sugar level has improved “greatly,” though. Mona said it was at

658 milligrams per deciliter last year, when doctors discovered she was sick (normal level is between 70 and 180 mg/dL). Now it is down to 80 mg/dL.

Despite her illness, the cheerful young star, a grade schooler at St. Monique College in Sta. Mesa, Manila, sees how much she should be thankful for.

“I’m happy that they keep giving me projects,” Mona said. “I’m sure other child actors can do a lot of things better, especially comedy. I haven’t tried that one yet.”

The Filipino-Bahraini kid shared with us her technique for crying on cue: “I imagine my mom, my siblings, my dog and my sister’s cat lost and I can’t find them.”

Her parents are separated. “I don’t remember when my dad left,” she said. “I hardly see him these days; I’m so busy. I miss him sometimes.”

In “Bukod Kang Pinagpala,” Mona plays Lara, daughter of Leandro (Mark Anthony) with Janet (Jackie). She will be raised by Ofelia (Jennica), and later adopted by Bessie (Camille). The three women will fight for her custody and her love.

“This role is different from others I’ve done before,” Mona said. “Here, when I’m maltreated, I fight back. I like that.”

Mona joined show biz via the top-rating show “Ang Munting Heredera” in 2011. She was also in the cast of “Luna Blanca: Unang Yugto” and “Aso ni San Roque.”