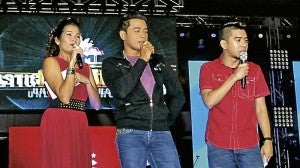 Nearby, Red Horse “Muziklaban’s” annual rock fest finals was in full swing. Over at the “Astig” party, fans raised not beer cans but red and blue balloons.

With celebrities, rappers, bands and comedians under one roof, the party felt almost like a noontime variety show, a comedy bar routine and grand fans day all in one.

Kakai Bautista opened the show with “Where Have You Been” by Rihanna. The spunky comic made the most out of her time onstage, singing, dancing, rapping and cracking up the audience. The way her squeaky speaking voice morphed into a full singing voice was impressive and amusing.

Then, Pokwang took the spotlight with her usual loud and rambunctious humor. She also showed off her vocal chops, belting out Aegis’ “Luha.” At one point, she pulled a guy from the crowd to hold the mic for her as she sang on her knees.

She was next joined by Angelica Panganiban, who lip-synched Sitti’s “Para sa Akin.” Angel’s singing wouldn’t win her new fans, but she can definitely hold her own when it comes to comedy. Her impromptu impersonation of Kris Aquino was quite convincing—and hilarious. 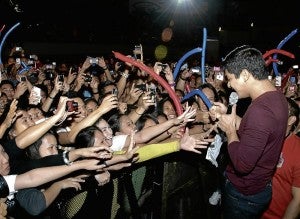 Eliciting some of the loudest cheers were Flip Top royalties Loonie, Abra and Dello, who shared the stage and launched fierce rap duels.

Needless to say, matinee idols Cesar Montano, Dingdong Dantes and Coco Martin didn’t have to do much to drive the estrogen-heavy crowd wild. Very wild. Like Angelica, Dingdong and Coco sang over prerecorded tracks—which obviously went unnoticed by all those girls at the foot of the stage.

Smile plastered on his face, Coco did a medley of Eraserheads songs such as “Pare Ko,” “Magasin” and “Ligaya.” And amid all the high-pitched shrieking and protestations of love, a man in front of us laughed and jested: “I thought Ely (Buendia) was performing at the other event (Muziklaban)?”