MANILA, Philippines—Though their name sounds straight from a fairy tale book, something Gaelic or Celtic, Imagine Dragons is a actually modern four-piece rock band based in Las Vegas, Nevada.

The band released two EPs titled “Imagine Dragons EP” and “Hell and Silence EP” in 2010, both recorded at Battle Born Studios. They returned to the studio in 2011 “Another EP, It’s Time,” was made before they signed a record deal. 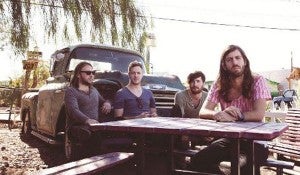 Imagine Dragons signed to major label Interscope Records in November 2011. They are working closely with producer Alex Da Kid with whom they recorded their first major label release at Westlake Recording Studios in West Hollywood, California. An EP entitled “Continued Silence” was released on Valentine’s Day (February 14, 2012) digitally and peaked at number 40 on the Billboard 200.

Shortly after, “It’s Time” was released as a single and reached the top five on the Billboard Alternative and Billboard Rock charts before becoming the group’s first top 15 single. It holds the record for the longest run on the 2012 Alternative Top 10 charts. The music video debuted on April 17, 2012 on all MTV affiliates and the band was named MTV PUSH Artist of the Week.  The video was subsequently nominated for an MTV Video Music Award in the “Best Rock Video” category. “It’s Time” was certified a platinum single by the RIAA in November 2012.

The band announced they would be entering Studio X inside Palms Casino Resort to finish recording their debut album Night Visions in the summer of 2012 and released the album on the day after Labor Day (September 4, 2012). It peaked at number two on the Billboard 200 chart with first week sales in excess of 83,000 copies, the highest charting for a debut rock album since 2006.  The album also reached number one on the Billboard Alternative and Rock Album charts.

Billboard Magazine listed them as one of “2012’s Brightest New Stars”. Amazon.com called the band their “Favorite Rock artist of 2012”.

Trailers for feature films including “The Perks of Being a Wallflower,” “The Words” and “The Host” have featured tracks from “Night Visions.” Imagine Dragons took a tour around the United States, Canada, and many countries in Europe, featuring their album, Night Visions in 2012. The tour sold out with the exception of two nearly sold out shows.

On October 27, 2012, Imagine Dragons producer Alex da Kid took to the internet to announce that Imagine Dragons is releasing a new EP “Hear Me”. A 2:13 long sample of the EP was also released. On November 25, 2012, the EP was released in the UK.

In 2013, Imagine Dragons will return to Europe and North America with the Night Visions Tour. Tickets are currently available although nearly all of the North American dates have sold out.

“Night Visions” featuring the hits “It’s Time” and “Radioactive” are now available in CDs at Astroplus and Odyssey Music & Video or online via iTunes or www.MyMusicStore.com.ph.

Get Night Visions by Imagine Dragons now on iTunes: