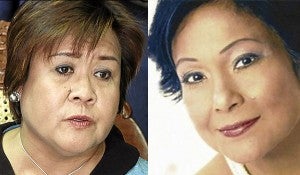 Yes, there are miracles, it turns out. One materialized on Tuesday at Ninoy Aquino International Airport after a series of false alarms and dashed hopes, and walked straight into a jostling throng of emotional devotees.

Nora Aunor, “Superstar,” do you think you’re what they say you are?

Not all the faithful had braved the torrential rains to camp outside the arrival gates the previous night. Well, a few hundreds did, but this one had pressing matters to attend to—like her own press conference at about the same time as her idol’s.

The tough-talking De Lima shrieked when the Inquirer asked if she was a Noranian. “Yes,” she said, laughing. Was she happy that her idol had come home? “Of course! Really, I know her.”

This same woman who had engaged not a few government officials in fierce word wars, was now waiting for the lawyer of policemen who had spilled the beans on the supposed switching of election returns at the House of Representatives in 2005.

In the meantime, she didn’t mind reminiscing, instead, about close encounters with La Aunor.

“She’s my townmate,” the justice secretary said. “In fact, I’ve even been told that she’s a distant relative. I think everybody in Iriga (Camarines Sur) is our relative.”

The actress’ 1970s starrer, “Tell Nora I Love Her,” was filmed in the De Limas’ ancestral home, the justice secretary said, accurately recalling that the leading man was Manny de Leon.

She also said that her father, retired Election Commissioner Vicente de Lima, even got a bit role.

“The entire movie was shot in our house,” the justice secretary recounted. “I think I was in Grade 6 or first year high school at the time. It took my father, who portrayed a lawyer, several takes to finish his scene because his line was in Tagalog.”

And what is her favorite “Ate” Guy film? “Himala,” De Lima replied swiftly. “I watched it in the movie house.”

Philippine Airlines Flight PR 103 from Los Angeles touched down at 3 a.m. The Centennial Terminal turned into a madhouse when Aunor walked in.

The official welcoming committee—close friend German Moreno, Laguna Gov. ER Ejercito, TV5 Creative and Entertainment Production head Perci Intalan and TV5 Production Unit manager Joann Bañaga—had to wait for half an hour as airport personnel and a few passengers rushed to the actress for photo-ops, or to ask for her autograph.

“The energy in there was really high!” Intalan told the Inquirer at the press conference that followed hours later at Edsa Shangri-la’s Boracay Room. “We could see Nora the Superstar again—it was exactly the welcome that she needed, after all that flak thrown her way during her absence.”

Intalan, very likely a fan like De Lima, described as “magical, euphoric,” the sight of fans toting banners and balloons, and chanting “Nora! Nora!” outside the terminal.

As Aunor emerged, a good part of the crowd burst into the chorus of “Superstar Ng Buhay Ko.” And then, Intalan said, hugging the first fan in sight, Aunor broke into tears.

At the press con, Aunor, speaking in Filipino, told the Inquirer: “It was great to see supporters who stood by me through thick and thin. I’m very, very happy to see both old and new faces welcoming me.”

She was proclaimed an exclusive TV 5 star, or “Kapatid,” for the whole length of her three-month stay.

When it came time for her to address the media, the sleepless Aunor started with an apology for not turning up in Manila on July 21. She had to wait a few more days, she explained, upon the advice of Moreno, who also acts as her manager.

“I really wanted to come home then, but some things still needed to be finalized with TV5,” the actress said. “I know that fans and friends waited for hours at the [Los Angeles] airport, and I’m deeply sorry.”

She entertained light banter about her love life and the possibility of working with past rivals and onscreen sweethearts, but declined to comment on the controversies that plagued her life in the United States.

“Many negative news items were written about me—some of them true, some of them not true,” she said. “I don’t want to go into details. Let’s just focus on my future projects.”

As a Kapatid star, she is slated to star in a miniseries to be directed by award-winning actor and film director Mario O’Hara. “It will be heavy on drama because that’s her forte,”’ Intalan told the Inquirer. He said Cinemalaya best actress Eugene Domingo has expressed interest in working with Aunor. “We’re also tapping some of our fresh talents, and planning to talk to Christopher de Leon and Tirso Cruz III.

But although she cannot work with other TV stations at this time, Aunor will be directed by Tikoy Aguiluz in a movie, the historical bio pic, “El Presidente,” that features ER Ejercito in the title role. She will play the role of Maria Agoncillo, Emilio Aguinaldo’s second wife.

Meanwhile, on Sunday, TV5 will hold “Superstar Grand Fans Day” as a treat for all Noranians. The event is scheduled in Broadway Centrum, but Intalan said it could be moved to a larger place, if necessary.

And why not invite the top Noranian at the justice department?