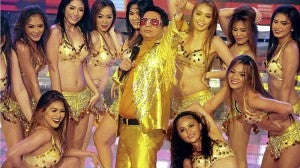 Willie Revillame’s return to the noontime slot via “Wowowillie,” has changed the noontime TV landscape. For the first time, all three major networks—ABS-CBN, GMA 7, and TV5—are offering a variety show in the same time slot.

Revillame gathered the same team from his TV5 prime-time show “Wil Time Big Time” for this latest entrant in the noontime derby. It is envisioned to be TV5’s new flagship program.

3) Main host: Revillame says he spent time away from the noontime grind watching “Eat Bulaga!” and “Showtime” because he “didn’t want to end up copying them.” 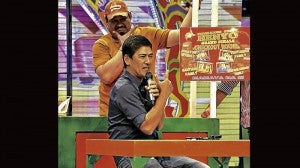 Ethel Booba, Arci Muñoz, Lovely Abella and Ava Jugueta. Revillame prefers an all-female team because, he says, “Behind the success of every man is a woman. This combination works for us.” He jests that he invited Villar on board because her parents, Sen. Manny Villar and senatorial candidate Cynthia Villar, gives away houses and lots as prizes.

—Contestants attempt to withdraw money from an ATM by guessing a PIN code.

•“Willie of Fortune”: Contestants vie for the lone slot in the grand prize section, “Pera S’ Wil.” At stake is a car, a house and a lot, or P1 in cash. 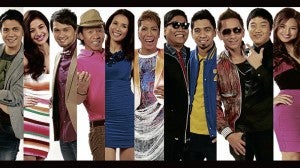 6) Set:  The new set cost P35 million, Revillame claims: “For research, I flew my staff on my private plane to Las Vegas, to watch Cirque du Soleil. I wanted a set as high tech as that of ‘American Idol.’

He says TV5 may have spent P100 million for improvements on the 1,100-seat Delta Theater in Quezon City—new lights, cameras and equipment, plus refurbished dressing rooms.

7) Reality portion: “Willie of Fortune” is still “the heart of the show,” Revillame says. Contestants are asked to recount their sob stories.

8) Remote segment: As of now, the show has none. But Jay Montelibano, business unit head, says there are plans for one, with Ethel, Ava and Lovely.

9) Sexy dancers:. In its premiere episode, the show had 300 dancers in the opening number. The regular troupe is called “Wowowillie Dancers.” Choreographer Anna Feliciano remains on board. 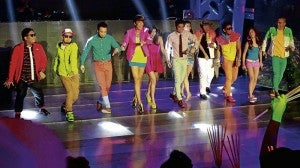 THE HOSTS of “It’s Showtime!” led by Vice Ganda (fourth from left) and Anne Curtis (beside him).

The show is the longest-running noontime variety show in the country. It marked its 33rd year on Aug. 18, 2012.

It is the first show of its kind to be franchised in another country. It premiered on Indonesia’s SCTV network late last year.

Directed by Bert de Leon, Poochie Rivera and Mark A. Reyes V, “EB” is produced by Television And Production Exponents Inc. The title was coined by one of its hosts, Joey de Leon. It loosely translates to “lunchtime surprise.”

1) Theme song: Introduced in 1982 and begins with the now-famous phrase, “Mula Batanes hanggang Jolo.” It was cowritten by Vincent Dy Buncio and Pancho Oppus, with melody by Vic Sotto and musical arrangement by Homer Flores. 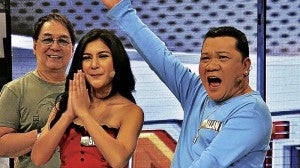 • “Hakot All You Can”—Led by child star Ryzza Mae Dizon, who picks four contestants who each gets P1,000 and a gift pack and are then asked to complete a “challenge.” The winner gets to gather as many “lucky coins” as he/she can in one minute. Cash prize depends on the weight of the coins collected.

• “PNV: Pambato ng Videoke”—Contestants are from those who registered for the “Juan for All, All for Juan” segment the previous day. They are asked to sing a song. Five judges, all cohosts, select the winner. The contestant with the highest point wins P15,000. 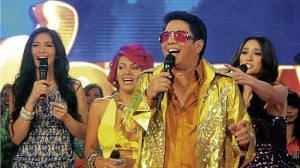 • “Pinoy Henyo”—Three teams of two players each get to play. Each team should guess a preselected word within two minutes. The winning team gets to sit on the “Henyo seat” for the jackpot round. The two take turns at guessing at least three words for three minutes. Take-home prize depends on the number of words guessed correctly—P10,000 for every word guessed, P50,000 jackpot for all three words.

On Saturdays, “Pinoy Henyo High” is played by high-school students for a pot of P100,000.

• “Juan for All, All for Juan: Bayanihan of d’ Pipol”—Currently the show’s most popular segment. It takes comedians Jose Manalo, Wally Bayola and Paolo Ballesteros to different barangays (villages) around Metro Manila, where they give away food, appliances and cash.

Every day, the trio visits a household that Vic Sotto picks from a list. The household gets a “Bossing Savings” account, courtesy of BPI and Globe’s BanKo micro savings bank, plus anywhere from P25,000 to  P40,000 in cash.

The three hosts, along with a “Sugod-Bahay Gang,” then lay out numbers on the street. Contestants are asked to bring certain items, then choose a number. From the studio, Vic picks the winning number. The contestant who has picked the same number gets P10,000 and gift packs.

6) Set: The show airs live from the Broadway Centrum in Quezon City. It occupies the 500-seat eastside theater, one of two in the complex. The show uses a multiple-camera setup. Two large LED screens that displays computer graphics serve as backdrop.

7) Reality portion: Contestants of the “Juan for All” segment occasionally share sad experiences during interviews with Jose, Wally and Paulo.

8) Remote segments: For its “Juan for All” and “PNV” segments, the show goes around Metro Manila and nearby provinces. “EB” began airing in Indonesia on July 16, 2012. It is expected to run until October 2013. The team has held concerts abroad, such as in San Francisco, California and London.

9) Sexy dancers: In 2006, the SexBomb Girls popularized the “Spaghetti” dance but drew flak from the Movie and Television Review and Classification Board for their scant costumes. Now, the featured talents are EB Babes, Boom Boom Pow Boys and Mr. Pogi Hunks, who are dressed more appropriately.

‘It’s Showtime!’ used to be a morning show

“Showtime” was originally a late-morning competition for dance groups and other performing acts. After two years and three months, it was reformatted into a noontime variety show and renamed “It’s Showtime!” It retained its competition segment and added new games and portions.

1) Theme Song: “Showtime” was composed by DJ MOD and Bobet Vidanes, and is performed by the show hosts.

• “Bida Kapamilya”—A competition portion on Wednesdays and Thursdays. Two families face off in a talent showdown. The highest pointer advances to the Friday weekly round. This proceeds to monthly rounds, and onto the grand finals, where the ultimate prize is P1 million. A celebrity edition was recently added.

• “Sample Mo, Premyo Mo”—The studio audience rates the families’ performances. Lucky audience members are asked to justify the score they gave, and are then asked to give a “sample” of their own talents. The cash prize they get depends on their performance (usually P5,000).
• “It’s Call Time”—Home contestants race to call five phones with corresponding numbers. The hosts then turn a roulette to determine what phone to pick up. The chosen contestant proceeds to a guessing game, where he or she gets a chance to win up to P10,000.
• “Arte Mo!”—A multiple-choice quiz mostly about pop culture. Possible answers to each question are acted out by the hosts. The last contestant standing proceeds to the jackpot round where he/she can win up to P1 million.
• “Kalokalike”—A new talent tilt for celebrity impersonators. Winner can take home as much as P20,000.
• “Makina Matibay”—This one pits a group of contestants with a machine in completing tasks such as coconut scraping, ice shaving, etc.  Cash prizes are up to P5,000.

6) Set: Studio 3 at ABS-CBN with blue, purple and pink lights dominating the flashy, modish set. A jumbo screen displaying graphics and videos serves as backdrop. There’s an elevated portion for the judges.

7) Reality portion: “Bida Kapamilya” contestants occasionally relate sob stories, but nothing excessive. Conversations between the families and hosts don’t go overboard with  drama, and usually end with jokes and laughter.

In “Bida Kapamilya,” designated hosts visit participating families’ homes to interview them and give gift packages. The house visits are pretaped and shown before the families’ studio performances.

9) Sexy dancers: None, but there are regular dancers, an all-girl group simply called Showtime Dancers, and XB Gensan, an all-male group. Costumes vary according to the theme of their numbers.