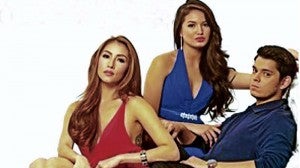 Sarah Lahbati, Richard Gutierrez and Solenn Heussaff are as gorgeous as the cracklingly crisp images that frame Peque Gallaga’s “Seduction.” Unfortunately, luscious visuals don’t a great movie make. The noirish dramatic thriller is a patchwork of titillating scenes that eschew logic for style, leaving its audience craving for greater coherence and believability.

The movie’s exposition ebbs and flows as it prods viewers to suspend disbelief that Gutierrez is a luckless fireman, Ram Malvar, who will to do anything to support his ailing father (Mark Gil). Is the money extorted by his corrupt colleague (Jay Manalo) from hapless fire victims enough to support his needs, or should he acquiesce to the financially lucrative proposition of his gay admirer?

Ram’s situation becomes more volatile when he meets the lovely but evasive Trina (Lahbati) and the charming but troubled femme fatale Sophia (Heussaff), an affluent Filipino-French documentarian who’s more than willing to pull him out of the financial mess he’s in—as long as he agrees to “put out her fire.”

“Seduction’s” tone vacillates between romantic drama and psychological thriller, but the result is something less than hoped for, because neither is done well—an engaging albeit gimmicky combination that fails to weave a compelling story. For instance, its “romanticized,” MTV-style fire scenes sorely lack urgency and a real sense of danger.

The film attempts to sex up Gutierrez’s wholesome image. But, even with facial hair and his speculated-about butt exposure, he fails to come across as anything more than an emotionally sterile protagonist who’s better left to wallow in his morally ambivalent reality—which is a pity, because we’ve never seen the 29-year-old actor in an edgier, more challenging role!

What about his leading ladies? We’ve always enjoyed Heussaff’s unaffected acting style, improvisational skills, and ease in front of the cameras. The movie doesn’t offer helpful insights into the complexity of her character, but it’s a testament to the actress’ thespic grit that she manages to successfully “clarify” her character’s motivations, and turns in an award-worthy portrayal! Sophia may be unhinged, but it’s hard to begrudge her of the happiness she yearns for.

The lovely and controversial Lahbati also generates real emotions, but her character is too staid and her motivations too vague to showcase her dramatic gifts.

It’s this unevenness in the lead actors’ portrayals that renders the confrontation scenes dramatically stillborn and inert—and the film an unsatisfying cinematic effort.