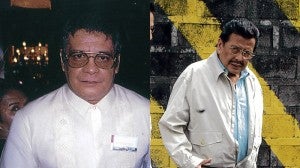 POE AND ESTRADA. Often cast as the sterling hero and his irascible “frenemy.”

When producers cast stars in new projects, they’re after a stellar combination that’s novel, unique, and plays on the lead actors’ individual strengths, on point of compatibility, contrast or even combustible “conflict.”

Thus, in the old days, when action films were in vogue, superstars Fernando Poe Jr. and Joseph Estrada, who were buddies in real life, made many movies together in which FPJ was the sterling hero and Erap played either his nemesis or irascible “frenemy.”

As for their leading ladies, when these and other action icons were younger, they favored young-adult actresses known for their beauty (Boots Anson-Roa) or allure (Imelda Ilanan, Elizabeth Oropesa). But, when they were older, they opted to co-star with nubile female comers young enough to be their daughters—or even their granddaughters!

At other times, action heroes frequently favored having a popular child actor (Niño Muhlach, Aiza Seguerra) for pint-sized sidekick. Jay Ilagan and Dranreb Belleza also did “sidekick” work for FPJ when they were kids, before they became young dramatic stars.

On the female front, popular young actresses like Susan Roces and Amalia Fuentes, both hailed as queens of local movies in the course of their long-running stellar careers, were sometimes pitted “against” each other in a special co-starring vehicle—the better to get their respective armies of fans all worked up into a loyal lather!

This rivalry assured the success of their costarrers at the tills, because both actresses’ fans made sure to “support” them by watching their latest film—at least once!

Other casting practices that made a movie the talk of the town included the “heir to the throne” gambit, best employed when a veteran star was ready to hand his or her “crown” to a younger talent.

Thus, drama queen Lolita Rodriguez tapped Nora Aunor to be her “successor” when they costarred in a Brocka drama. For her part, Vilma Santos was deemed to be the rightful heiress to the thespic “throne” of Charito Solis.

Other casting ploys played on the popularity of local beauty queens, many of whom became stars in their very first movies. If local beauty titlists were feted and adored, that went double for the Filipinas who triumphed in international beauty competitions: Gloria Diaz topbilled “Ang Pinakamagandang Hayop sa Balat ng Lupa,” and Margie Moran starred with Cocoy Laurel in “Oh, Margie, Oh,” etc.

Over and above these casting gambits, the most popular crowd-drawing ploy is still the “love team”: Nora Aunor and Tirso Cruz III made many hit movies together, as did Vilma Santos and Edgar Mortiz, and, later, Vi and Boyet de Leon.

The illusion and “delusion” of rhapsodic romance that the cinema is a past master at concocting is still hugely profitable, as today’s new love tandems’ hit starrers continue to prove. Never mind if it’s more fiction than fact, movie fans still lap it up as TV-movie producers keep the fantasy going—and chortle all the way to the bank!