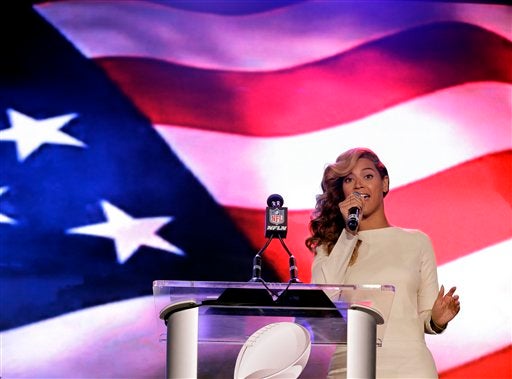 NEW ORLEANS—Beyonce answered critics of her Inauguration Day performance the best way she could — with another sterling performance of the national anthem.

On Thursday, it was live: She admitted during her Super Bowl news conference that when she performed for President Barack Obama and the nation, she decided to sing to a pre-recorded track because she didn’t have time to practice. Calling herself a self-proclaimed “perfectionist,” she said wanted the day to go off without a hitch.

“I practice until my feet bleed and I did not have time to rehearse with the orchestra,” she said, adding that she was also emotional that day. “Due to no proper sound check, I did not feel comfortable taking a risk. It was about the president and the inauguration, and I wanted to make him and my country proud, so I decided to sing along with my pre-recorded track, which is very common in the music industry. And I’m very proud of my performance.”

It was the superstar’s first public comments on the scandal.

Her rendition of the anthem was critically praised, but was scrutinized less than a day later when a representative from the U.S. Marine Band said Beyonce was lip-syncing — merely mouthing the words to a pre-recorded track — and the band’s accompanying performance was taped. Shortly after, the group backed off its initial statement and said no one could tell if she was singing live or not.

With the controversy growing each day, and everyone from politicians to other entertainers weighing in, the inauguration performance threatened to overshadow her planned Super Bowl halftime show. So the 31-year-old, wearing a tight, cream mini-dress, addressed the issue as soon as she took to the podium Thursday afternoon.

She asked everyone to stand, and, with an image of the American flag behind her, performed a live rendition of the national anthem that mirrored the one on Inauguration Day. After, she said with a laugh: “Any questions?”

Despite her performance, there were.

When pressed about whether any sound was coming from her voice when she sang for the president, she said she was singing along to the track and not mimicking (though it’s unclear how audible her voice was). And when asked if she would be singing live at the Super Bowl, she said: “I will absolutely be singing live.

She added later: “I always sing live. … The inauguration was unfortunately a time where I could not rehearse with the orchestra, actually because I was rehearsing for the Super Bowl. So that was always the plan.”

Beyonce also got a chance to talk more in detail about the reason why she was in New Orleans — to perform at the halftime show. Calling it one of her career aspirations, she said when she arrived at the Superdome, she was so moved by the experience she took her shoes of and ran on the field, taking in the history at the famed venue.

“It really makes me emotional,” she said. “When I am no longer here, it’s what they’re gonna show.”

Beyonce has teased photos and video of herself preparing for the show, which will perhaps be the biggest audience of her career. Last year, Madonna’s halftime performance was the most-watched Super Bowl halftime performance ever, with an average of 114 million viewers. It garnered more viewers than the game itself, which was the most-watched U.S. TV event in history.

But she would not give anything more away about the performance. While a Destiny’s Child reunion was shot down by Michelle Williams, who is starring in a production of “Fela!”, the third Destiny’s Child member, Kelly Rowland, is in town. Beyonce laughed off questions of whether Rowland or Beyonce’s husband, Jay-Z, would join her on stage.

“I can’t give you any details, sorry,” she said.

She also would not reveal her set list, though acknowledged she was having a hard time trying to “condense a career into 12 minutes.”

Before the news conference, Beyonce’s “Life is But A Dream” was shown to the media. The documentary about the star’s life features her talking in-depth about intimate details of her life, including suffering a miscarriage; it will air on HBO on Feb. 16.

In it, she also reveals more of her 1-year-old daughter Blue Ivy, whom she called her inspiration.

“I feel like my daughter changed me and changed my life and has given me so much purpose,” she said. She added that she was counting down until 9 p.m. Sunday, when her performance would be over — and she could be reunited with Blue Ivy.