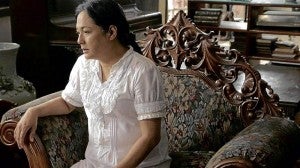 “If you don’t like my performance, just leave the theater—that’s what my friends would do. If you like it, then give me a hug.”

Gina Alajar, lead actress of “Mater Dolorosa,” gave the audience this message during the gala screening of the Adolfo Alix Jr. drama at the Cinema One Originals Film Festival in November.

The movie is competing for the Big Screen award at the 42nd International Film Festival Rotterdam in The Netherlands, which runs until Feb. 3. It is about Lourdes Lagrimas, a matriarch who runs an organized crime business in the province.

Cast member Evelyn Vargas, who coproduced the movie, is confident that Alajar’s performance will earn for the actress numerous “hugs” from foreign critics. “Gina is underrated,” Vargas told the Inquirer. “She doesn’t have the title Superstar, Megastar, or Diamond Star but … I consider her the Meryl Streep of the Philippines.”

The movie was first offered to Nora Aunor in 2011. Aunor turned it down due to a conflict in her schedule.

Alix said Alajar was well aware that she wasn’t the first choice for the role. “She didn’t mind at all. She even said it could be a lucky charm, like a few other movies she had earlier accepted as [replacement] star.”

The director cited Laurice Guillen’s “Salome” and Marilou Diaz-Abaya’s “Brutal,” both critically acclaimed films with Alajar in roles originally meant for other actresses.

“What’s important, Gina told me, was that when the camera starts rolling, she is the one playing the lead,” said Alix, who flew to The Netherlands on Sunday to attend the festival.

Alajar worked on the film for a total of eight days, while she was also directing the GMA 7 drama series “Magdalena.”

“Gina’s character is a simple woman. Most of the time, she’s reserved and contained. Pero ’wag mo siyang kakantiin (But don’t mess with her) … for she will seek revenge,” Alix added. “It’s amazing that with very little explanation from me, Gina played the character exactly the way I wanted her to. I guess, it’s also because she’s had so much experience working with the likes of the late Lino Brocka. She was one of his favorites.”

Alix said the scene where Lourdes grieves for the death of a family member was his personal favorite. “Everyone is wailing but she just sits there, showing no emotion. She doesn’t shed a tear. This reveals a strength which the whole family holds on to.”

He admired Alajar’s professionalism, Alix said. “I never heard her complain even when I asked her to repeat one scene six times. She, Gina, knew the right emotions to show in every scene. She could easily pick up where we left off the previous day.”

While he already expected Alajar to deliver a compelling performance, Alix said, he was still surprised about how the movie turned out. “I was amazed at how she cried in many different ways. I don’t know how she did that. It probably helped that she was already acting at age 8.”