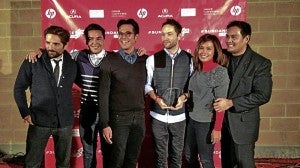 The Filipino cast of Sean Ellis’ “Metro Manila” considered their victory at the recent World Cinema competition of the Sundance Film Festival “special” because the award came from the audience members.

“Having a Sundance-winning film validates our work,” Jake Macapagal, one of the film’s lead actors, quipped. “We have connected to a ‘world’ audience who were able to relate with the characters’ struggles and dreams.”

“Metro Manila” won the audience award in the World Cinema-Dramatic category of the Sundance fest.

“The moviegoers themselves would cast their votes after every screening,” John Arcilla, the other lead star, added. “Sean (Ellis) was nervously joyful. He said that, in the end, the audience was our judge.”

Ellis said: “It’s a great achievement for everyone who worked on the film. I’m proud and honored to receive this  award. My hope is that this victory will secure a wider release for the film.” 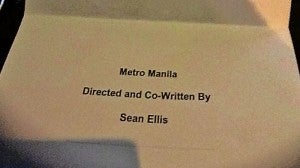 ARCILLA took these snapshots of the envelope that bears the good news.

Arcilla reported that the film’s screenings were “sold-out” every time. “To think, the audience members came from different parts of the world. The award is proof that the audience really got involved in the film.”

“We were received well during the Q&As,” Macapagal recalled. “Every audience member shook my hand and had something very personal to say about how they were moved by the film.”

“People were constantly asking us about the Philippines, congratulating us for the film,” Ana Abad Santos, another cast member, said.

Macapagal added: “The question that kept popping up was ‘Why the Philippines?’ I kept saying, ‘Why not? It’s more fun in a country where every challenge could be turned into wonderful opportunities for change.’” 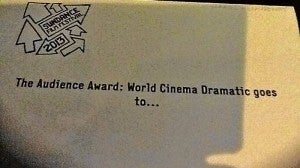 ARCILLA took these snapshots of the envelope that bears the good news.

After the film was declared the audience award winner, Ellis invited the cast and crew to accept the trophy with him onstage.

“Sean (Ellis) is an amazing director,” Abad Santos said. “He made this film with us and we were like a family on the set.”

“It was a wonderful feeling,” said Arcilla of going up the Sundance stage.

The actor, who wore an Ito Curata suit during the premiere, said: “This is positive news that will help in marketing the film around the world.”

“I was overjoyed. It was overwhelming,” Abad Santos said of the film’s success. “People were cheering for us  … and to be congratulated by Joseph Gordon-Levitt. I was speechless.”

She initially thought that the “Inception” star would be “snooty and unapproachable.”

“He had bodyguards all the time,” Abad Santos recounted. “But he was very accommodating. He was so cute and cool.” 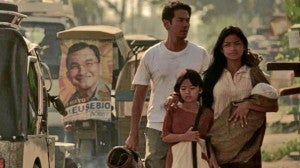 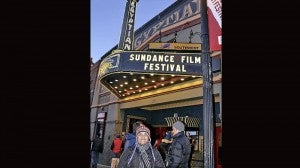 IN WINTER gear, Arcilla braves the freezing temperatures in Utah.FACEBOOK

On top of their win, the Filipino actors in the movie’s cast also got to hobnob with Hollywood A-listers on the red carpet in Park City, Utah.

The Hollywood Reporter praised the Filipinos. “Much of the film’s effectiveness is attributable to the lead actors’ well-modulated performances.”

In spite of the freezing weather in Sundance, familial warmth remained to be the Filipinos’ strongest suit. Abad Santos said: “Everyone in the world could see that Filipinos always treated each other like family. I guess that’s why this film touched a lot of people.”

Including not a few Filipinos in Utah, she said.

It was “Filipino power” in action, Abad Santos said. “There were many Filipinos in Sundance. I’m sure they voted for us, too.”