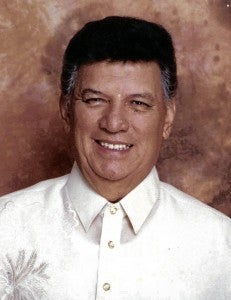 MANILA, Philippines—Tributes poured in like jackpot prizes from a box as peers in show biz remembered the good times with game show host Pepe Pimentel, who died in an accident at his Quezon City home Thursday morning.

The veteran comic, champion singer, and community leader is best remembered for making “Kuarta o Kahon (Cash or Box)” a pioneering concept in Philippine television, where contestants get to choose between a cash offer and what’s inside a sealed box—which may be a bigger prize or a mere piece of eggplant, a can of sardines or other tokens for the unlucky.

Supt. Marcelino Pedrozo Jr. of the Quezon City Police District’s Kamuning station said Pimentel was found dead with a wound at the back of his head inside the bathroom of his house on Scout Tuazon Street in Barangay (village) Laging Handa around 10:30 a.m.

Pimentel’s nephew Jessie Santos said his uncle, who was not suffering from any serious illness, apparently slipped and hit his head on the floor.

Pimentel earlier spent Thursday morning walking around the neighborhood in Barangay Laging Handa, where he was elected chairman in 1997 and held the post for 10 years. During his years in public service, neighbors would often see him sweeping the sidewalk himself or ridding the streets of election campaign posters that end up as eyesores.

“It was his usual custom to walk around the neighborhood in the morning,” Santos told reporters. “My uncle was a good man. He was able to help many of our relatives in their studies.”

Aside from hosting “Kuarta,” which ran from the 1970s to 2000, Pimentel is also known for his “mother-in-law” jokes—even though colleagues say he really adores his real-life biyenan off-screen.

Encar Benedicto-Ordoñez, Pimentel’s cohost for 11 years, said, “I will miss his punch lines about his biyenan. He would often show us a photo of a monkey or an orangutan and joke that it’s his mother-in-law’s portrait. In reality, he cared for his wife’s mom.”

Boots Anson-Roa, who shared hosting chores with Pimentel in another iconic show “Student Canteen,” agreed: “In spite of his biyenan digs, Pepe loved his mother-in-law deeply. We salute him.”

Another TV host, Amy Perez said, “I owe what I know as a host to Tito Pepe. He taught me everything I should know to be effective.”

Stand-up comedian Jon Santos said Pimentel was his “first boss” on the noontime show “Tayo’y Magsaya,” which was cohosted by another respected veteran, Sylvia La Torre. “I was an assistant on the show then. Tito Pepe showed incredible mastery of the Pinoy game show. He knew its ins and outs,” Santos recalled.

Comedian Willie Nepomuceno remembered Pimentel as an outspoken mentor. “If you are aspiring to be a performer, get ready to get a lecture from him on the proper conduct of an entertainer. He would often unleash a mouthful because he took great pride in his job.”

“He also took an activist’s stand on public issues and was a true public servant,” Roa added. 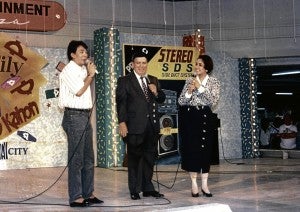 Pepe Pimentel (center) was always the dapper showman, shown here with his cohosts on the game show “Kuarta o Kahon,” which ran from the 1970s to 2000. PHOTO COURTESY OF ENCAR BENEDICTO ORDOÑEZ

Batangas governor and award-winning actress Vilma Santos said Pimentel “left an enduring mark in the local entertainment industry. He introduced game shows on local television. He was a pioneer.”

Nepomuceno pointed out another accomplishment: “He was the first grand national champion of ‘Tawag ng Tangahalan’ (an amateur singing contest popular in the 1960s). He was a true-blue entertainer.”

“I can smell talent a mile away and when I met him, I knew he was good,” said another popular TV host of the period, Eddie Ilarde of “Student Canteen” fame.

Ilarde recalled meeting Pimentel for the first time in 1954, when “Student Canteen,” originally a radio show on dzXL, was about to break into TV.

“Pepe was a comedian’s comedian,” said Ilarde, also a former senator. “He’s one of the few people who could make me laugh. He’s a clown, a mimic, one of the best, really. I just don’t know whether he studied his craft. He was dedicated and hardworking; never a day did he come late for work.”