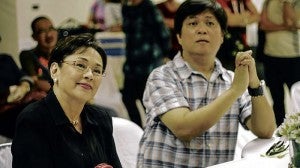 “I am so scared,” actress and Batangas Governor Vilma Santos whispered to executive producer Joji Alonso and director Jeffrey Jeturian at the end of her first day of work for the Cinemalaya entry, “Extra,” on Thursday.

Santos had just attended a production meeting with the film’s cast and crew and finished a camera test.

During the production meeting, Santos candidly asked for the cast and crew’s help. “I will be feeling my way around in the first few days. Please guide me. I need to familiarize myself with the indie way of filmmaking.”

Although she was nervous, Santos asserted that she was giddy with excitement as well. “In anything in life, you have to take risks. You need to keep challenging yourself.”

Alonso decided to hold a getting-to-know-you session with the entire cast, to set a few ground rules.

The No. 1 rule in the executive producer’s list? In true indie fashion, the “star for all seasons” should not be treated like a star on the set.

“She is not supposed to stand out. She needs to blend with the rest of the crowd,” Alonso explained.

Since she is playing an every woman in the film, co-actors should try not to get star-struck, too.

For her part, Santos was willing to look deglamorized for the part, Jeturian pointed out.

“She won’t wear as much makeup, unlike in her mainstream films. She is ready for a more natural style of acting, too,” said Alonso.

In spite of the uncertainty, Santos need not fret because Alonso and Jeturian are self-confessed Vilmanians.

Alonso said: “Jeffrey and I have always been her admirers. She has played so many roles and has delivered outstanding performances. But we both feel there’s still so much we can squeeze from her.” 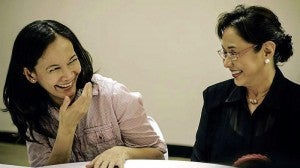 EXECUTIVE producer Joji Alonso (left) has cast the star for all seasons as a movie bit player.

They’ve been presenting projects to Santos for the past three years, Alonso admitted. “Finally we found the right script for her with the help of our producer Ferdy Lapus.”

Santos so loved the script that she waived her talent fee for the film.

“When I was young, I used to cut classes in San Beda to watch her movies in (nearby theater) Cinerama,” Jeturian said.

When he became a production assistant, Jeturian worked with Santos in Marilou Diaz-Abaya’s “Alyas Baby Tsina” in 1984. Three years later, he was in charge of script continuity in Eddie Garcia’s “Saan Nagtatago ang Pag-Ibig?”

“Working with her, I realized just how sincere she is,” Jeturian said. “Whenever we would see each other at awards shows, she would remind me about our plan to work together.”

Santos was quick to point out that she wasn’t going indie simply because it’s a raging trend in the movie industry.

“I’m not doing this for other people … I’m going indie for myself. For self-fulfillment,” Santos said.

In the movie, Santos will portray the titular bit player. “I’ve never experienced being an extra. In my first movie, ‘Trudis Liit,’ I was already cast as the lead. I’ve always wondered what’s it like to be an ordinary movie worker.”

As a child actress, she remembered being awed with the glamorous stars of Sampaguita Pictures.

“My sister and I would sit on the sidewalk and watch as the actors entered the Sampaguita compound. The most beautiful star for me then was Gina Pareño,” Santos recounted.

It was serendipitous that she mentioned Pareño’s name.

Jeturian and Alonso were responsible for Pareño’s indie breakout movie, “Kubrador,” which won a slew of awards here and abroad.

“I bought a copy of ‘Kubador’ and it was an original DVD ha,” Santos quipped. “I always wanted to know how indie films are made. It looked as if the actor walked for 24 hours in those long takes. Lakad nang lakad (They kept walking and walking).”

Upon seeing the “Extra’s” big crew, Santos likewise expressed surprise: “I didn’t know that there were a lot of people in the staff of an indie film. I thought there were only five people on the set.”

The team, which also includes executive producer JV Tence, hopes to finish the film by March, long before the election fever heats up in Batangas, where Santos is running for reelection as governor.

“I’ve already told Atty. Joji and Direk Jeffrey that the province is my priority. If there’s an emergency, I may need to rush back to the provincial capitol,” she said.

But surely they could shoot near her office? “One scene can be set in a sugarcane field in Batangas. I know the perfect location for it,” she remarked.

Looks like she could act as location manager for this movie, too.