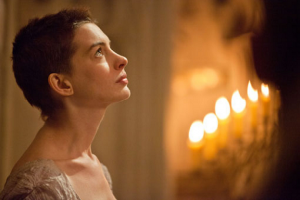 Though Hathaway was seen smiling and laughing all throughout, she appeared irritated by a few questions of the veteran show-biz columnist.

Lo asked how did she lose weight for the role and gain it back again, Hathaway declined to answer, saying it’s something personal.

Hathaway plays Fantine, the ill-fated character of a poor, pretty innocent woman who becomes a prostitute.

Hathaway’s mother Kathleen Ann “Kate” McCauley played the role in the original “Les Miserables” cast that was toured in the United States. Hathaway cited in several interviews how she learned a lot from her mom.

Lo asked if Hathaway got some pointers from her mother, she answered with a straight “No.”

When Lo asked her how she was able to play the role of a poor woman when she is “perceived to have lived a life of luxury and privilege,” Hathaway declined again, citing it’s “very personal.”

The role was also played by Lea Salonga in 2010 for the 25th Anniversary of “Les Miserables”.

In the interview, Lo showed an SMS from Salonga that apparently said something about Salonga’s eagerness to see the movie.  Hathaway reacted positively, seemingly flattered and was all smiles saying, “I adore her.”

But when Lo asked for a message to Salonga, “who is looking forward to meet you in person” Hathaway declined again, saying, “We’ve already talk about that.”

At the end of the more than four-minute interview, Lo asked Hathaway to invite her Filipino fans to see the movie.
The still-smiling Hathaway said, “Why don’t you invite them, they’d rather hear it from you.”

While many netizens lambast Lo for what they described as a rather “disgraceful interview” with general questions that seemed more appropriate to lesser-known celebrities, Lo’s colleagues in the industry defended him, citing his long stint in entertainment journalism.

Lo has been entertainment editor and columnist of a national newspaper for decades. He is also co-host of “Startalk,” a Saturday entertainment talk show on GMA7, on which his live interviews are usually shown.

Jim Paredes in a Facebook thread described the interview as “a big cultural gap.”

A theater actor posted: “When you interview an actor, most especially someone really big, you ask about the craft, the production process. Don’t ask personal questions, unless you are Oprah. Avoid intrigues. And most especially, it is not a time to flaunt who you ‘know’ and compare them with the subject. Otherwise, the interview will turn out bad. Really bad. Even embarrassing.”

Earlier links to the said interview have been deleted though more have been posted again with some parodies highlighting Lo’s “gaffes.”