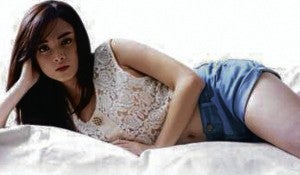 MEG IMPERIAL: “When you say yes to a film, you should be willing to meet all the requirements, all the way.”

Young actress Meg Imperial, who plays the lead role in the Joel Lamangan sexy drama “Menor de Edad,” learned three important things while working on the film, especially when she did her love scenes with costar Wendell Ramos.

“First is that you should be open-minded,” the 19-year-old told the Philippine Daily Inquirer.

“Once you’ve agreed to do it, you should be willing to meet all the requirements, all the way.”

These were her first love scenes since she started acting more than four years ago.

Meg continued: “Second, you should be familiar with camera tricks that could be employed in executing sensitive scenes.”

Lastly, she said, “Be prepared to tap into your emotions. You must be able to express the right feelings in every scene. It would help if you are convinced that you are making a good film.”

Meg joined the biz as a commercial model at age 9. She appeared in TV shows “Ysabela,” “Maria Flor de Luna,”  “Midnight DJ,” “My Driver Sweet Lover” “PO5,” “Bagets” and “Glamorosa.” She recently signed up as a talent of Viva Entertainment. “Menor de Edad” opens in theaters nationwide on Jan. 23.

How did you convince your parents to allow you to go sexy?

When I told my parents how good the material was, they gave me their blessing. I said I wouldn’t do frontal nudity or back exposure.

What was it like shooting your first love scene?

I was so nervous, partly because I did it with Kuya Wendell, who is older.

How did Wendell treat you?

Very gently. He told me that this was just work, and that actors have to do at least one love scene in their career.

You described this one as a “steamy” love scene.

It was really hot on the set and I was sweating. There were so many lights!

You also had a “rape” scene.

I prepared myself emotionally. The scene took so long to do and was quite violent. I did it with three actors; it helped that they were my friends. I was confident that they wouldn’t take advantage of me. We didn’t rehearse it, so it came out very real. When they strangled me, though, my fear was real, and so were the tears.

Read Next
Life beyond thespic stardom
EDITORS' PICK
Pagasa: Warm, sunny Sunday in most parts of PH
vivo’s coming to town to grant wishes with more holiday promos
Is it safe to talk politics again at family gatherings? ‘The Reconciliation Dinner’ shows us what that’s like
The Best Tech Gifts For The 2022 Holidays
House energy committee chair Arroyo bats for cheap electricity
EDITORIAL: To a bike-friendly future
MOST READ
LOOK: Vhong Navarro transferred to BJMP detention facility in Taguig
The Elephant Man in the Senate
Posh village as ‘shabu’ haven
LOOK: Zanjoe Marudo bonds with Ria Atayde, her family
Don't miss out on the latest news and information.