Co-stars rule out romance while at work 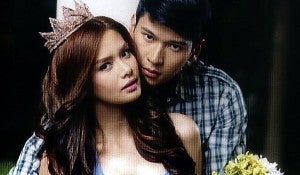 On-screen partners Erich Gonzales and Enchong Dee promise not to fall in love with each other while working on their latest ABS-CBN soap, “Maria la del Barrio.”

“We agreed to focus on work because it gets affected when we have misunderstandings,” said Enchong, who plays the rich but purposeless Luis dela Vega in the local adaptation of the Mexican hit series.

“We intend to keep that promise,” said Erich, whose character was first portrayed by Mexican singer-actress Ariadna “Thalia” Sodi Miranda in a Filipino-dubbed series in 1995. “We’re happy where we are. We’re very close friends and we enjoy each other’s company.”

The two started working together in the afternoon drama “Katorse” in 2009. They appeared in two other soap series, “Tanging Yaman” and “Magkaribal,” the following year.

Enchong hastened to add that anything could happen to two young people working together for six straight months. “We may tell you one thing today, something different tomorrow. We really can’t say,” he explained.

Erich admitted to feeling the pressure of playing the lead role. (She and Enchong just finished the successful series “Magkaribal” where they played support roles.)

Director Rory B. Quintos is all praise for Erich, whom she describes as very professional. “She’d do anything you ask of her,” Rory said of her lead star, who won the “Star Circle National Teen Quest” in 2005. “We’ve only taped three weeks’ worth of scenes. Erich’s scenes with Enchong will get steamier as the story progresses. Of course, we are in the 6 p.m. time slot so we will only show scenes that are allowable.”

Quinto said her production team made sure to “Filipinize” the show “to reflect our culture, our identity.”

“Maria la del Barrio,” written in Filipino by a team led by Denise O’Hara and Henry Quitain and codirected by Richard Somes, was shot in scenic spots in Tagaytay and Cavite City. It premieres on Aug. 15 on ABS-CBN Primetime Bida.