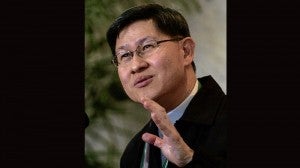 Last Sunday, we joined hundreds of Elvira Go’s friends, including many bishops and all three cardinals, in wishing her the very best on her birthday. The well-loved philanthropist, “religious activist” and host-producer of the “Power to Unite with Elvira” show on PTV 4, was visibly moved by the affection with which she was surrounded, especially by her own “consistory” of ecclesiastical elders, whose worthy projects she’s supported through the years.

The sermon during Mass at the Peninsula ballroom was delivered by no less than Cardinal Luis Antonio Tagle, and his talk inspired us not just with its content, but also with the competence he displayed as a media-savvy communicator.

For years now, in talks all over the country, we’ve tried to make our clerics and other religious more aware of the fact that the old days of the pulpit are over, and that the new and more productive way to reach out and touch parishioners’ hearts and lives is through TV and the other mass media.

Alas, some old habits have proven to be too tough to crack, particularly for older clerics, so the transition from pulpit to the mass media in spiritual mentoring has generally not been made.

A bright prospect, however, now presents itself in Cardinal Tagle’s case because, for some years now, he’s been hosting his own religious TV program, and has been doing it significantly well.

Other clerics and religious who want to more quickly catch up with the rest of the world in terms of effective communication would do well to watch Cardinal Tagle’s shows, because they point the way they too should go.

When Cardinal Tagle speaks on his program, he doesn’t “jazz up” or “pump up” his message with camera tricks or special effects, he simply talks clearly, “one-on-one,” with his imagined viewer.

This is the first lesson that all religious who want to use TV to communicate their spiritual counsel should learn: That “going TV” doesn’t mean forcing yourself to turn into a with-it, joke-a-minute entertainer!

It just means simplifying and clarifying your message, believing in its personal relevance to your viewers and listeners, making it impinge on their actual lives and experiences, and thinking of your viewers, not as a faceless mass or blob, but as individuals.

That’s the unique strength of the television medium, the intimate, one-to-one relationship it establishes between the face on the screen and the lone viewer at home—and that’s what effective communicators like Cardinal Tagle know how to use and enable their viewers to benefit from.

Aside from providing a good “teaching” example in his own telecasts, Cardinal Tagle should organize workshops for other priests and spiritual speakers, to help them know how to better utilize the mass media in spreading God’s word and will to the country’s millions of viewers and listeners.

It’s high time that Catholic clerics catch up with the rest of the evangelizing world in this regard, before the century of mass communications completely passes them by.