At 11, Zaijan fears being a has-been 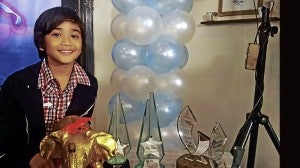 ZAIJAN Jaranilla knows that popularity doesn’t last forever. He says he always prays for more projects to sustain his career and achieve his dream of being the next John Lloyd Cruz.

In a few years, 11-year-old Zaijan Jaranilla will step into that dreaded, awkward teen transition phase, when most child actors struggle to find suitable roles.

Since becoming a household name in 2009 via the hit drama series “May Bukas Pa,” projects have been pouring in for Zaijan. He has done at least one regular show every year—“Agua Bendita,” “Noah,” “Ikaw Ay Pag-ibig” and “Lorenzo’s Time.”

But at such a young age, Zaijan already knows that popularity doesn’t last forever; he already understands the concept of being laos or a has-been.

“It means you still have a career, but you’re not as well-known to people anymore,” Zaijan said at a recent press con for “Wansapanataym,” which he is headlining for the whole month of January.

That’s why every time he hears Mass, Zaijan said that he always prays for more projects so that he could sustain his career, and achieve his dream of being the next John Lloyd Cruz.

“Every time my family and I go to church, I always pray, ‘Lord, I hope I become more famous and don’t run out of projects. I hope you give me more talent so I can continue to make other people happy,’” related the precocious star, who also dreams of becoming a businessman.

His older costars in the past had complimented Zaijan for having acting maturity beyond his years.

How does he work on his roles? “I get the script early so I have time to study my roles. My directors also guide me and explain the flow of the story,” he explained.

Zaijan admitted he has a crush on an older singer, whom he’s too shy to name. “No, that’s a secret!” he said, turning bashful. “She’s very nice and pretty. I’ve told her that I have a crush on her.”

The Kapamilya star drew cheers and a couple of laughs from the press when Zaijan declared that, in love, “they say that age doesn’t matter!”

For the holidays, Zaijan and his family flew to their home province Marinduque. “We went to the beach. We bonded and really enjoyed ourselves,” he said.