‘A Perfect Christmas’ with friends in Dubai | Inquirer Entertainment

‘A Perfect Christmas’ with friends in Dubai 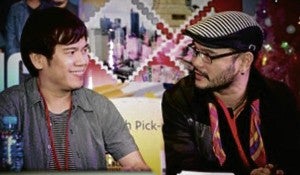 MEDWIN Marfil and Wency Cornejo at the press con in Dubai for their concert last month, “A Perfect Christmas.”

Christmas came early for me when I flew to Dubai first week of December for “A Perfect Christmas,” the concert of my all-time fave band and good friends, True Faith and Wency Cornejo.

Jonathan Gulmatico of Eventologist Dubai and Mamita Daisy Tayag billeted us at Golden Sands hotel. It was such a delight to wake up to Medwin’s (True Faith’s front man) cool vocalizing and the sound of guitars. If I hadn’t been tone-deaf, I would have burst into song.

I’ve always been one of the boys, so it was fun bonding with the band and Wency till the wee hours. It was just like playing house.

After all these years in the music industry, True Faith and Wency still have much passion for their craft. “The true test for any musician—to see if they’ve made it—is when their songs are sung in karaoke joints,” said  Wency. “My advice to aspiring bands is that they should hone not just their technical skills; they should also be able to feel their audience interact with them in a manner that will benefit every performance.”

Medwin echoed the same sentiment, saying, “Some bands these days are too concerned about the rock star image. They are full of angst. Although it’s good to stay hungry, they should also learn to relax, let the music take over.”

Wency switched to ulirang anak/ama (ideal son/father) mode when he talked about his mom, Mel Tiangco, and his son, Z.

“Though I’m earning my keep, it feels good to make lambing (show affection to) my Mom once in a while,” he said. “Her best advice to me is to switch off my heart to people who are just out to use me. I’m based in Davao where I have a business (Galletas de Davao), but I often fly to Manila to visit my Mom. She dotes on my son. Even if Z’s desired Christmas gift is quite pricey, I bought it pikit-mata (with eyes closed).”

Dubai is fast becoming “Pinoy Country.” Anywhere you go, it’s impossible to not bump into a Filipino. There are even clubs named Kita Kits, Boracay and Comedy Junction. It makes you proud to see our kababayan  (compatriots) shine as entertainers in the UAE. There’s also a radio program for Pinoys, “Dubai Eye,” and Filipino newspapers.

Our trip coincided with the Dubai International Film Festival. Johnny Depp, Gwyneth Paltrow and many Hollywood stars were also in town. I so wanted to stalk them.

It was a thrill to take a side trip to Abu Dhabi, where the movie “Sex and The City 2” was filmed. I savored some Carrie Bradshaw moments while strolling around Ferrari World.

Of course, the highlight of the trip was True Faith and Wency’s concert. Wency regaled the audience with his timeless hits. He was joined onstage by seasoned guitarists Marc Velasco and Vic Nicolas. True Faith set the party mood by playing their signature songs. The crowd gamely sang along. I almost forgot I was in Dubai because Pinoy energy and vibe surrounded me.

Bravo, True Faith and Wency, for singing your hearts out and bringing a piece of home to our kababayans in Dubai. And thank you, Dubai, for leaving some room for Pinoys to show you that it’s really more fun with Filipinos around.