A Rockstar on and off Broadway | Inquirer Entertainment
Close
menu
search

A Rockstar on and off Broadway 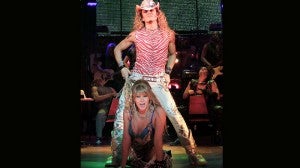 When Mig Ayesa snagged the role of 1980s rocker Stacee Jaxx in the Broadway musical “Rock of Ages,” no one would have thought that this Filipino Australian singer suffered a bad stutter as a kid.

“When I spoke, I couldn’t say the Rs or Ws, Ts or Ds,” he revealed to The FilAm in an interview at the Helen Hayes Theatre.

Thanks to music, he got rid of the speech disorder. “When I sang or read a script, my stutter disappeared. That’s why I fell in love with being a performer.”

There was no trace of a slurring stammer during our hour-long interview. Nothing on stage as he sang “Wanted Dead or Alive” and other hits popularized by the Bad Boy of the Arsenal band. (A movie version has Tom Cruise playing Stacee Jaxx. Cruise watched Mig in the L.A. production of “Rock.”)

Mig shot to fame as a finalist in the CBS television series “Rockstar: INXS.” Performing on Broadway was nowhere near his bucket list.

“I’m more of a rock singer, and I have that singer-songwriter kind of vibe,” confessed the singer untrained in the discipline of vocal projection and delivering lines.

But when he and actress-wife Simone De la Rue moved to New York from L.A., the first thing they had to do was find work.

When he auditioned for the Tony Award-winning musical, he thought the role of Stacee Jaxx was practically in the bag because of his history as a “Rockstar” finalist. To his ego-shattering surprise, it took a year and two auditions before the role became his.

“I thought I did a great job. People would tell me we saw you on Rockstar. So I said to myself, I’m in, I got the part. And then I haven’t heard anything, nothing. I was hoping at least I’d get a callback or something, but nothing. I thought I sucked, I didn’t get any feedback from the audition,” he said. “And then a year later, they called me to audition again. At first I didn’t understand why ‘cause I thought they liked my version of Stacee Jaxx. So I did, I auditioned in the morning, and they offered me the job in the afternoon.”

Of the cast, Mig is the one who bares almost all — a pair of skivvies is his theatrical costume. He admitted to feeling “a lot of pressure” to tone up. “I’m pretty strict about my fitness. I have a great motivation, ‘cause when I’m about to choose between the salad and the burger, OK I’m thinking, I’m wearing underwear in front of 700 people tonight.”

“It’s the only part that I wanted to do in the show,” he said. “I come in and I’m over the top. I like the part because he’s the guy that the audience remembers the most.”

Mig and his wife are loving New York, they couldn’t imagine themselves anywhere else right now.

“We found it a great place to be very proactive. The theatre district is alive here. L.A. is more film and TV. Here, it’s theatre and everything else. So we took the chance,” he said.

Mig bikes his way to the Helen Hayes Theatre and back to his Upper West Side apartment in relative anonymity. He does eight shows a week, six days straight. Like most New Yorkers who struggle to make a life in the most expensive city in the world, Mig said he has to keep working.

Read Next
Taiwan indignant over Venice film festival error
EDITORS' PICK
Every Filipino home can now be a smart home with realme TechLife
PLDT Home Prepaid WiFi customers now under the care of Smart
Nestlé Philippines’ ‘NESCAFÉ Plan’ bags Grand Anvil at PRSP 56th Anvil Awards
Wesley So officially a US citizen
‘Pilgrim of peace’ Pope Francis heads to war-scarred Iraq
WHO: Arrival of vaccines in PH ‘a powerful step’ towards economic recovery, normalcy
MOST READ
Kris Aquino dispels rumors on son Josh getting married, thanks Ogie Diaz for defending him
LTO’s P500-M deal for screws draws scrutiny
Wesley So officially a US citizen
Ginebra trades Slaughter to NorthPort for Standhardinger
Don't miss out on the latest news and information.