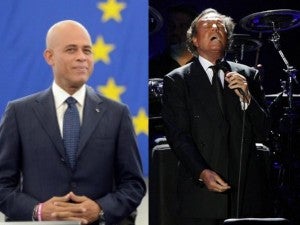 Haitian President Michel Martelly, better known by his stage name of “Sweet Micky,” thanked Iglesias for dedicating a concert of his “1 World Tour 2012” to Haiti’s children.

The proceeds will go to the Pink and White Foundation, a charity run by Martelly and his wife, Sophia.

The duet represented Martelly’s first performance outside Haiti since he was elected in May 2011. He was previously known for often bawdy performances before becoming president.

“I’ve been a singer my whole life, but I never thought I’d be here next to you, singing,” Martelly told Iglesias.

Between laughter, jokes and hugs, the two men sang “Corazon, Corazon” in Spanish and “To all the girls I’ve loved before,” in English.

Iglesias had visited Haiti following the devastating 2010 earthquake that officials say killed an estimated 300,000 people and left hundreds of thousands of people homeless.

“That’s why the Dominicans are here today, with love, so that your children will be taken care of,” Iglesias said. “This will show you, my president, the love of the Dominicans for Haitians.”

An estimated 5,000 people filled an open-air amphitheater in the Altos de Chavon, a high-end residential complex east of the capital of Santo Domingo. Ticket prices ranged from $50 to $1,000.