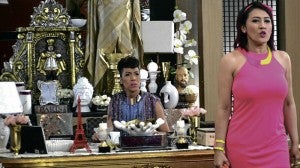 So there’s this yuppie who complained, seething, that he had to wait two more weeks to catch “Les Misérables” because he had to endure “Si Agimat, Si Enteng Kabisote at si Ako” and “Sisterakas.” Man, was he livid!

And there was this cineaste who came close to hyperventilating because, by the afternoon of the second day of the Metro Manila Film Festival (MMFF), “Thy Womb,” the only movie he wanted to watch during the 10-day fiesta, had been pulled out of one of the cinemas in the mall. It was replaced with “Si Agimat,” one of the two highest-grossing films. Forgetting that ’tis the season to be jolly, the film buff started sputtering cuss words.

Okay. Here are some in-your-face, down-to-earth facts: The MMFF does not cater to people who can sing the entire score of musicals about the French Revolution, nor to film scholars who believe franchises of horror or comedy films that have been around since the term of the first Macapagal president should be outlawed.

The truth of the matter is that we should stop fooling ourselves and expecting things to change.

The MMFF is only a film fest by name; it is actually a fiesta. Better yet, it is the biggest tiangge  (flea market) that opens on the day Christ was born. And there is nothing wrong with that.

For how can anyone find fault in a celebration of a multimillion-peso business that offers so much fun, amusement and entertainment, and even serves as painkiller to traffic-weary Pinoys? How can that be an error of judgment or, to be more specific, a crime against tastefulness? Whose taste are we concerned about? Can we be honest about this?

Listen, snoots: The MMFF is an alternative to Rizal Park, Star City and Enchanted Kingdom.  This is the only time of year when the Filipino has enough money to watch movies. And when they come flocking to the theaters, they come in droves. Literally in prides—tatay and nanay with the chikitings (small kids) whimpering, wailing, hanging on to their parents, braving the long lines.

Christmas is pampamilya (a family affair); thus, you have these child-friendly movies served in the fiesta year after year… after year.

If we can accept queso de bola, jamon tsina, fruit salad and other foreign delicacies on our dining tables each and every Christmas of our Pinoy lives, why are we making such a big deal our of the endless installments of “Enteng Kabisote” and “Shake, Rattle & Roll”?

Why do we rant with rage or sigh with despair, all the while still hoping that one day these franchises will go away and that there will finally be more socially relevant and cinematically validating films on the roster? What right have we to scream, “Utang na loob, awat na (For heaven’s sake, stop it)”?

This can only mean that all those who are complaining and demanding allegedly better, if not movies of greater variety, do not constitute the percentage of the population who really matter to the fiesta.

Yes, yes, those who feel miserable because they have to wait for two more weeks to catch “Zero Dark Thirty” will have to contend with the fact that “Sisterakas” made almost P39 million on the first day. (Add laugh track here.) We can also bet that this movie about the search and annihilation of a top terrorist will not come close to a movie starring Vice Ganda, Ai-Ai de las Alas and the Presidential Baby Sister.

For as long as movies like “Si Agimat,” “Sisterakas” and “Shake” are making money, the ilustrados (enlightened ones) have no right to complain.

Or they can go watch “El Presidente” and see what life was like in the late 19th century, to realize that, well, things are still pretty much the same in this country. (With the notable exception that in the film, Baron Geisler found himself, for some strange reason, impersonating Dick Dastardly in “Wacky Races.”)

The festival exists because moviemaking is a business. Remember that it is an industry. Movies are made based on the law of supply and demand. More important, your favorite producer does not exist for purely humanitarian purposes. He is investing money to make more money. That is not too hard to understand because it is the same principle that operates in any business—whether it is a fishball cart or a billion-peso, multimedia conglomerate.

Producers have a very simple guiding rule: You want to watch this, then we will make it for you. Do you want to cry, laugh, get scared, etc.? Name it and we will do it, as long as it will sell tickets. Will these movies uplift taste and refinement of spirit? We’re not even going there. We will just squeeze your lungs until you turn purple laughing at Ai-Ai de las Alas or make you suffer cardiac arrest as you cry your tear ducts dry following the plight of Angel Locsin. Everybody happy?

Because goals are set based on how much money the festival hopes to make for the producers and its organizers and beneficiaries, we should accept that a film like Brilliante Ma. Mendoza’s “Thy Womb” is more of a fluke, and Mark Meily’s “El Presidente” got in simply because of ER Ejercito.

Otherwise, entries that are so out of the usual templates deemed “sellable” by the selection committee will have a very remote chance to land in the Magic 8.

For the record, “Thy Womb” got in only because Unitel pulled out “Mga Kuwento ni Lola Basyang.” Otherwise, there would have been yet another child-friendly General Patronage movie on the menu.

Let it also be known that the inclusion of “The Strangers,” a horror movie megged by an indie director and starring an ensemble of nonbox-office performers, came in with the support of Star Cinema as distributor and because of its producer’s track record.

Like spaghetti and lechon (roast pig) on the noche buena table, the movie outfits selected to grab a slice of the delicious holiday box-office pie were more of the same.

So why are we even surprised that we got, more or less, permutations, reincarnations and reformulations of the movies from last year?

So who’s complaining? Certainly not the producers who took home more than P30 million on the first day.

This is no longer the same MMFF that gave us Ishmael Bernal’s “Himala” or Celso Ad. Castillo’s “Burlesk Queen” or Mike de Leon’s “Kisapmata” or Lino Brocka’s “Insiang” or Marilou Diaz-Abaya’s “Brutal” and “Jose Rizal.”

This is no longer the festival that showcased the best and the brightest of Filipino filmmakers.

The moment they started awarding the best picture trophy to the top-grossing film, not only was the criteria changed, the whole mind-set of the celebration was realigned. The competition now centered on who got to take home the biggest profit. The trophies became peripheral, if not merely instrumental in earning more money by power of endowed prestige.

That is why it is all right for theater owners to bump off under-performing entries (regardless of how good they are as cinematic pieces), to give room to the more profitable movies. That is why there is no rule, and certainly no political will, to give the better films the fighting chance to not be gobbled up by the ultracommercial, tried-and-tested formula products created precisely to make money.

Originally, the festival’s original purpose, as envisioned by the late Manila Mayor Antonio Villegas, was to provide a window for Filipino filmmakers to show their finest works. But that lofty goal has been ignored in favor of something more practical and real: How much profit you can earn in the two weeks when box-office grosses are tax-free and Hollywood movies are blocked out of theaters. Again, by the laws of capitalism, there is nothing wrong with that.

We hear of plans to modify the rules, to democratize the selection process, to open new platforms for indie films, student films and the like. But let’s get real: It is still about the eight films that open on Christmas Day. It’s all about the movies being an industry that seems to have put aside the fact that cinema is also an art.

Again, as we said, only a few are complaining. So, tuloy ba ang ligaya (will the merriment continue)?

(The author is an award-winning scriptwriter and filmmaker. He teaches Producing, Writing/Directing for Film, and Writing/ Directing for TV at the De La Salle University.)