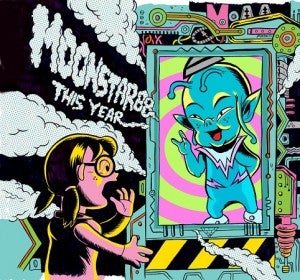 Moonstar88’s latest album “This Year” contains eight songs that are about experiences most Filipino listeners can fully relate to such as having a secret crush or falling in love.

“Personally I never took it seriously that … OPM is dying, I don’t want to make a big deal about it,” Moonstar88 lead vocalist May Chelle Baay said in an interview during the launch of their latest album “This Year.”

“Because for me, music is always going to be there, it’s going to evolve. OPM in particular, there will always be people interested in writing music, whether it’s for their own or for their family or for a bigger audience,” Baay said.

She said that maybe the perception that OPM is dying is coming “from a business perspective.”

Piracy in the music industry has long been a problem due to the losses in sales of albums. Filipino artists have constantly been appealing to people to buy albums instead of downloading music from the internet.

When asked what Moonstar88 would do if ever the local music industry does suffer further, drummer Bon Sundiang said that they will still continue to make music for anybody who will still want to listen to Filipino music.

“If ever the time comes when the ‘business side’ of OPM dies then music will be totally free for everyone and it will never die. And as long as there are believers and listeners of OPM, we will continue to write, record, and play music for them,” Sundiang said.

Guitarist Herbert Hernandez said that he had a conversation with Chito Miranda, lead vocalist of Parokya ni Edgar, who told him that “OPM is not dead, it’s just in a comatose state.”

“[That] means that it’s there and is not disappearing,” Hernandez said. He pointed out that because of the advent of digital technology people are now able to choose from a vast array of music from all over the world and not just in the local industry.

“The youth today are consuming too much, it’s like the whole Earth versus Philippine music industry, there are so many choices. It’s up to us to adapt because, before, the competition was just here in the Philippines,” Hernandez said.

When asked if they felt overshadowed by the many foreign artists and musicians performing in the country, bassist Paolo Bernaldo, said that the live concert production of foreign acts will definitely trump local performances.

But when it comes to the songs, OPM songs will always be better than foreign, Bernaldo said. “You can see it in the quality,” he said. “Filipino songs are on a different level.”

Hernandez said that the influx of foreign artists in the country is a sign of the increasing power of the Filipino consumers who can now afford to go to concerts of international musicians “unlike before when foreign artists were so unreachable.”

“And besides, I don’t think it’s unhealthy and neither is it a threat [to OPM],” he said.

Sundiang said that the entry of foreign acts should be a challenge to both the local artists and record labels. “We cannot avoid consuming foreign, not just in music but also in film and in everything,” he said.

Hernandez believes that despite the wide variety of music available to Filipinos, they will still come back to the music that they can relate to, which is OPM.

“[OPM is] written by Filipinos, and so other Filipinos can relate to local songs because we are from the same culture,” Hernandez said. “They will always come back to local.”

“This Year” the Album

Moonstar88’s new album, entitled “This Year” will be something that Filipino can thoroughly relate to, Baay said.

“It’s about feelings, experiences, things we have gone through usually as we grow and mature,” she said.

The album contains eight tracks, including two special tracks: an acoustic version of “Migraine” and another version of the song “Ligaw” that features Chito Miranda of Parokya ni Edgar.

The mostly-Tagalog album took two and a half years to make and was officially launched on December 3. “The songs included in the album have that instantly nostalgic feel, making you remember the significant parts of your life without actually feeling cliché,” Moonstar88 said.

All four members of the band are also busy with their own personal careers. Baay is a senior manager for a research and development company, Bernaldo is a freelance director and own and manages the tomatokick restaurant, Hernandez is a creative director in an advertising agency, and Sundiang is a marketing manager for the INQUIRER Megamobile company.

Hernandez said that they owe a big debt to their fans who have been constantly asking them when their new album would be released.

“The reason why the name of the album became ‘This Year’ is because whenever fans ask us about our new album, we say it will be released ‘this year’,” Hernandez said.