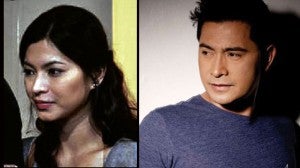 LOCSIN (LEFT) AND MONTANO. Turn in memorable portrayals in “One More Try” and “El Presidente,” respectively.

Brillante Mendoza’s “Thy Womb” and Mark Meily’s “El Presidente” may not be the 38th Metro Manila Film Festival’s top crowd-drawers (“Sisterakas,” “Si Agimat, Si Enteng Kabisote at Si Ako” and “One More Try,” in that order, topped the box office on opening day), but their inclusion in the eight-entry lineup marks a timely changing of the guard that raises the annual film event’s game. Both movies should be patronized, because they characterize the type of innovative, unconventional features that the festival was conceptualized for in the ’70s.

The Cannes-winning director’s Venice-winning drama follows an infertile Badjao midwife’s (Nora Aunor) tireless search for a suitable second wife for her aging husband (Bembol Roco). Mendoza’s most “commercial” project to date isn’t encumbered with the predictability and hackneyed style of mainstream storytelling, and is held together by Aunor’s restrained but stirringly immersive portrayal.

The Superstar is grossly miscast, however, as Maria, Emilio Aguinaldo’s second wife, in the star-studded “El Presidente,” Meily’s insightful dramatization of the Philippine uprising against its Spanish and American colonizers as seen in the eyes of the country’s controversial first President. (Watch it alongside Richard Somes’ less successful but visually sumptuous “Supremo.”)

The historical drama’s boldly imaginative take on the power struggle between Aguinaldo (Jeorge “ER” Ejercito) and Andres Bonifacio (the award-worthy Cesar Montano) is riveting, but its protracted running time and dark visuals compromise its viewability and commercial appeal.

Ruel Bayani’s provocative “One More Try” is occasionally hobbled by an overlay of melodrama, but the finely nuanced performances turned in by Angel Locsin and Angelica Panganiban help the movie effectively play out its polarizing conflict and the moral questions it raises.

In Wenn Deramas’ revenge-themed comedy, “Sisterakas,” Vice Ganda and AiAi delas Alas portray warring siblings who must join forces to overcome a manipulative rival (Kris Aquino). As expected, the film is as rollicking as it is predictable, but it plays well to the strengths of its leads—and, Aquino’s deliciously self-referential turn is more hilarious than any of the comedy flick’s verbal and sight gags!

Andoy Ranay’s “Sosy Problems” and its lovely cast (Rhian Ramos, Bianca King, Heart Evangelista and Solenn Heussaff) just want to have fun—and, despite loose ends that need tying up and a seemingly rushed finale, they do, along with their viewers!

Paced by Ramos, King and the scene-stealing Mylene Dizon, the film follows the zany misadventures of four “sosyal” friends who meet their match in the social-climbing Bernice (Dizon).

Lawrence Fajardo’s “The Strangers” puts a novel spin on the aswang myth—but, it takes forever to get to its shocking twist. Even less successful is Chito Roño’s “Shake, Rattle & Roll 14: The Invasion,” which is strung together by three cautionary tales (“Pamana,” “Lost Command” and “Unwanted”) that are neither funny nor scary.