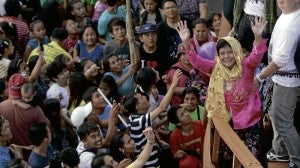 FILM FEST PARADE Superstar Nora Aunor, who stars in “Thy Womb,” waves to fans during the Metro Manila Film Festival Parade of Stars. RICHARD A. REYES

For celebrities, there’s nothing quite as exciting as being on a float and seeing a sea of fans wanting to catch a glimpse of them.

That’s why the annual “Parade of Stars” that kicks off the Metro Manila Film Festival (MMFF)—now in its 38th year—is an event show biz neophytes aspire to be a part of, and a tradition for seasoned actors and actresses.

On a sweltering Sunday afternoon, eight eye-catching floats representing eight competing entries delighted the fans who lined the parade route, which started at  Quirino Grandstand in Rizal Park and ended at SM Mall of Asia.

Despite the ominous clouds, the participants were generally upbeat, such as “Sosy Problems” star Bianca King, who was dressed comfortably in a pink tank top and shorts.

“I’m looking forward to seeing all the beautiful faces in the parade. I don’t mind if it rains or if it gets hot,” she said.

But the skies turned sunny. Smiling, the stars blew kisses, threw goodies and waved at some 300,000 people as the motorcade moved on.

Singer and former child actor Makisig Morales of “Shake Rattle and Roll XIV” said being in the parade was a dream come true. “Not a lot of actors get a chance,” he said.

Actress Mercedes Cabral of the indie drama “Thy Womb” was likewise excited about her first time joining the parade. She said the event reminded her of her college days in the University of the Philippines Diliman, where she used to help create floats for the yearly Lantern Parade.

“The Strangers” star Janice de Belen isn’t exactly new to joining the MMFF. The Kapamilya actress, who’s also in “Shake Rattle and Roll XIV,” said she couldn’t remember if she had actually ridden on a parade float before.

“This is a whole new experience for me, and I’m quite nervous!” she exclaimed.

For veterans, the festivities have become an indelible part of their careers.

Sen. Ramon “Bong” Revilla, Jr., a star in  the fantasy-adventure flick “Si Agimat, Si Enteng at Si Ako,” said in an earlier interview: “As a celebrity, it’s my job to entertain and make people happy. Seeing the fans is such a great feeling.”

It’s been 15 years since Nora Aunor joined the festivities and the Superstar was excited to be once again part of the celebrations. She told the Philippine Daily Inquirer that “I’m happy that we were able to get in.”

Aunor holds the record for the most MMFF best actress wins with seven. This year, critics are touting the 59-year-old actress as the one to beat for her performance in the indie drama “Thy Womb,” which already has won for her acting trophies at the Venice Film Festival and the Asia Pacific Screen Awards.

Dressed in traditional Badjao clothing, Aunor, “Thy Womb” director Brillante Mendoza and costar Cabral were aboard an oversized replica of a lepa, a Badjao boathouse.

They were joined on by mock rowers and dancers, who regaled the people with Badjao dances. Fans chanted “Nora! Nora!” as she ascended the float.

The float of “Si Agimat, Si Enteng at Si Ako”—reportedly worth P1 million—carried Vic Sotto, who sported a warrior costume. A monster octopus was prominently featured at the front of the float, while its sides were decked with colorful wild flowers and plants. Revilla and Judy Ann Santos joined Sotto on the float later.

The float of “The Strangers” was a simple red and black rectangular vessel. On it were Enchong Dee, Julia Montes, Enrique Gil and JM de Guzman.

Faux rose petals were sprinkled on the sides of the float of the drama “One More Try.” Angel Locsin, Zanjoe Marudo and Dingdong Dantes waved as the float inched slowly.

The fully costumed cast of “El Presidente” was led by  Jeorge “ER” Estregan, Cristine Reyes, Christopher de Leon, Cesar Montano and Baron Geisler. Their float had a replica of Emilio Aguinaldo mounted on a horse.