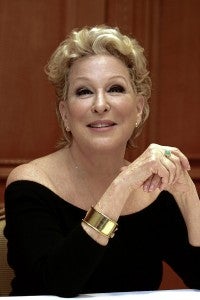 LOS ANGELES—In our latest encounter with the Divine Miss M in Manhattan, we told her that we knew a Filipino talent (Behn Cervantes) who performed with her in stage productions at the University of Hawaii, back when she was a girl raring to spread her wings. That inspired Bette Midler to muse about those early days in her native Hawaii, before she moved to New York and eventually went on to become an award-winning singer and actress.

Bette stars with Billy Crystal in “Parental Guidance,” a comedy where the two beloved performers portray grandparents. The film’s themes of parenting and tough love steered our interview toward talk about her mommy skills, daughter Sophie (who is now 26), and husband, actor Martin von Haselberg.

At 67, Bette, in an off-shoulder blouse and short skirt, is still sassy. She can be serious and funny in the same breath. Excerpts of our chat:

What were you like when you were performing in productions at the University of Hawaii?

I was pretty much the same. I was lively, and I had a lot of energy. I was very curious, ambitious and anxious to get away and start my life. I’d have to say that was the main thrust of my existence at the time.

I’m too young to be a grandparent. I’ve forbidden my daughter to become pregnant, just until I’m ready. That would be in a hundred years!

What were some things that you wish you had done differently as a parent?

I think my daughter is pretty much perfect, so I don’t really feel that I’ve made any real mistakes. The biggest thing that I did right was I married my husband, who’s a great father. He’s one of the greatest—he was chosen for that job! He picked up all the slack when I was out of town doing movies. He raised a great child. I had a hand in it, too, but he really was my rock!

I was there a lot, but I wasn’t there as much as I wish I had been. It was a wonderful time in my life—and in my daughter’s life. Even though you’ve been told your whole life how fast it goes, you don’t really know until you’ve experienced it! I never missed a birthday. We traveled a lot together.

My daughter is the first person to say that she’s the only one in her crowd who loves to spend time with her parents. Every year, we have at least three (major) things that we do together—we cook, eat, and travel to Flushing (New York) to eat Chinese food. We’re a family, and we love each other’s company so much. It’s our chance to grill her and know what’s going on. A lot of parents don’t have that luxury, so I’m grateful.

Will you do another show like “The Showgirl Must Go On”?

I don’t think I’ll be doing that kind of show again. It was the biggest show I ever did. There were a lot of people involved, and that stage was vast! It was just too big for me—I was carrying the whole thing on my shoulders!

I also don’t like the pollution that those gigantic shows engender. I still love to sing and entertain. But, I want to find another way to do it that has a lot of charm and impact, but not as stressful on the planet.

How did being in that show in Las Vegas change your life?

It was 20 weeks a year, for two years—and it was tough! The first year was good. The second year was tougher, because the (economic) crash happened. The city itself went through major changes. I was there as a performer, so I saw those changes in Las Vegas. It was very disturbing.

One of the things I learned early on about the show and the venue was that if a performer didn’t work, the ushers and the box-office people didn’t get paid. So, I felt obliged to show up. I never missed a show. It was hard because, in order to keep yourself vital and healthy enough to do those shows, you had to follow a strict regimen. No this, no that, no carousing, no carrying on. Only two drinks.

You had to do Pilates, the treadmill, and all that. It was two years of Groundhog Day! In the end, I was very tired of everything.

When are you most comfortable?

In my pajamas and socks, with my blanket on. I am most comfortable puttering around the house in my rags.

Funnily enough, it isn’t getting on a plane and going somewhere. It’s getting in the car, going down to the flower market in Manhattan, to the place where they have ribbons and bows. Oh, my God, it’s just heaven—those beautiful things!