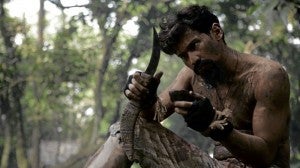 On a road trip to a province, a family gets caught in a raging war between so-called aswangs and hunters determined to annihilate the supernatural creatures. Fajardo, director of award-winning Cinemalaya films “Amok” and “Posas,” makes his first horror flick. It’s a complicated shoot, he explains, because the story involves “stunts, special effects, prostheses and a huge cast.” This project has proven to be his biggest undertaking yet. Producer Joji Alonso of Quantum Films relates that Fajardo is in his “element, working triple time as director, editor and production designer.” Fajardo asserts: “I wanted to tell a different kind of horror story.”