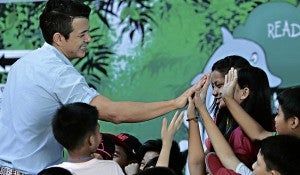 Nearly a thousand children from all over Metro Manila listened to stories about biodiversity and the riches of the planet during the two-day Inquirer Read-Along Festival last Nov. 26 and 27 at the Ninoy Aquino Parks and Wildlife Center in Quezon City.

With the theme “The Filipino Child and the Stories of the Earth,” the festival featured more than a dozen celebrity readers. The event was a marathon of six storytelling sessions.

The newly crowned Miss Earth 2012 beauties regaled kids with the story of “Amansinaya,” a story about a fishing community written by Eugene Evasco.

“The kids were very excited, which was exactly what we wanted. We want to make them interested about issues like taking care of the environment and about renewable energy,” said 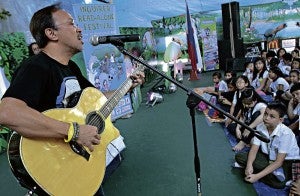 Fajksova, whose arrival drew shrieks of delight from the kids.

Brant said the children were “very friendly and responsive.”

“I really like the partnership between the Miss Earth Foundation and the Inquirer Read-Along because it gives us a way to spread and call attention to environmental causes like sustainable energy to children,” Stefanowitz said.

Singers Acel and Julianne read Adarna House’s “Hipon and Biya” by Carla Pacis, a story about how two different sea creatures find a way to coexist peacefully, to an audience of deaf kids. They were assisted

“It was challenging because we had to make up for it in facial expression and large hand gestures,” said Acel.

“What I take from this experience is that every child is special and should be treated equally,” Julianne said.

Abrera, returning Read-Along storyteller and cohost of “Mars” television show, said: “This one is especially remarkable because it is a bigger event than the intimate setting in the Inquirer office.”

“The children were amazing,” said Dy of the “Balitanghali” news program. “They had a remarkable memory.”

Cabangon, who read Rebecca T. Añonuevo’s “Ang Mahiyaing Manok,” said, “It’s always nice to perform in front of kids, especially when you can impart lessons to them.” 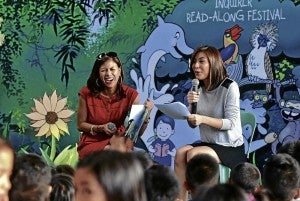 “You are trying to entertain the kids while also hoping that they listen well and learn from you,” added Arellano, who read Evasco’s “May Alaga Akong Butanding.”

Rosales and Valenciano were greeted by loud shrieks from kids and adults alike. They read in tandem Virgilio S. Almario’s “Si Pilandok at ang mga Buwaya.” They were assisted by stage actor Francis “Chuck” Gomez along with 19 kids from the audience, who acted as the crocodiles in the story.