Nora’s performance will break your heart 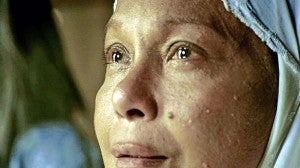 AUNOR. The eyes have it

Genuine talent ages like wine. This was once again proven to us when we watched Brillante Mendoza’s “Thy Womb” and the remastered version of Ishmael Bernal’s “Himala” one after the other last weekend—as well as Sari Dalena and Keith Sicat’s instructive behind-the-scenes documentary about the 1982 Filipino film classic.

Thirty years after its sweep at the eighth Metro Manila Film Festival, Bernal’s “religious” drama—about 24-year-old Elsa’s miraculous visions during a long, dry spell in barrio Cupang in the early ’80s—is as breathtakingly provocative and relevant as ever, with a Truffaut-like thematic pertinence that complements its lead actress’ iconic dramatic gifts and stature.

From the barren north to the poverty-stricken south, the Superstar continues to evolve in this year’s MMFF entry, “Thy Womb”—a true-to-life story about a childless Badjao couple, midwife Shaleha (Aunor) and fisherman Bangas-an (Bembol Roco)—who supplement their income by weaving mats out of dyed rattan leaves.

When Bangas-an is wounded during a violent skirmish between soldiers and rebel troops, Shaleha decides that it’s time for her husband to take a second wife—who could give him the heir he’s been yearning for!

Searching for a wife is one thing, but finding someone appropriate (and whose dowry they can afford) is a different matter altogether! The task isn’t easy for Shaleha, who tirelessly roams the seaside villages of Tawi-Tawi for prospective maidens.

Then, they find lovely Mersila (Lovi Poe), who, unknown to Shaleha, agrees to marry Bangas-an—on one condition: If she gives him a child, he should leave his first wife! Does Bangas-an have the heart to leave Shaleha?

Regardless of the outcome, that same question will linger in viewers’ minds long after they leave the theater. Mendoza doesn’t just offer a peek into the lives of our marginalized brethren in the southernmost portion of Mindanao, but uses the camera to let us observe and experience what it’s like to bask in a strange but parallel world that’s steeped in tradition—and one that (very) slowly unfolds before our eyes.

Our quibble involves the long stretch of unseen events that follow Mersila and Bangas-an’s wedding and those that take place before the former gives birth to a son. Yes, there’s nothing wrong with a simple story or an open-ended conclusion—but, in this case, there’s simply too much information left for viewers to imagine on their own.

What about the performances of the stellar cast? Roco and Poe provide ample support for Aunor’s silent but intensely immersive portrayal. Nora will break your heart as her world-weary face lights up at the film’s final fade.

Like the movie itself, Shaleha doesn’t know the fate that awaits her after she delivers Mersila’s baby, but the evocative eyes of the legendary actress who portrays her do!