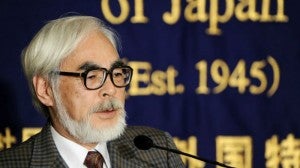 TOKYO_- Oscar-winning Japanese animator Hayao Miyazaki’s first film in five years — a wartime romance — will be released next year, its distributor has said.

Miyazaki, who created “Spirited Away”, which won Best Animated Feature in 2003, and “Ponyo” (2008), will release “Kaze Tachinu”, based on the novel of the same name, usually translated as “The Wind Has Risen”, distributor Toho said on Thursday.

In a career that has spanned five decades, Miyazaki has achieved critical and commercial success around the globe, blazing a trail for the genre of Japanese cartoons — known as anime.

Miyazaki collaborator Isao Takahata will also release his first new film in more than a decade next year. “Kaguyahime no Monogatari” will be based on Japan’s oldest novel “Taketori Monogatari” (The Tale of the Bamboo Cutter) believed to have been written more than 1,000 years ago.