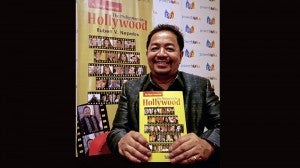 PDI man in Hollywood during the Manila launch of “The Philippines in Hollywood” at Powerbooks, Greenbelt 4 early this year. ALANAH TORRALBA

Inquirer Entertainment columnist Ruben Nepales won the Best Print Award at the 2012 Migration Advocacy and Media Awards for his book titled “My Filipino Connection: The Philippines in Hollywood” published by Anvil Publishing early this year.

The book, a compilation of success and inspiring stories of talented Filipinos, Filipino–Americans and Filipino-Canadians who made it to the Hollywood scene, was among 37 official entries.

Twelve media works from the United States, Australia, Kuwait and the Philippines were named winners in various categories.

The MAM Awards, launched last year by the Commission on Filipinos Overseas (CFO) recognizes the significant role of the media in raising public awareness on issues related to Filipino migration, the challenges of migration and development.

The awarding ceremonies, which will be part of the annual celebration of the Month of Overseas Filipinos and International Migrants Day for 2012, will be held on Dec. 18, 6 p.m., at SSS Magsaysay Hall in Quezon City.