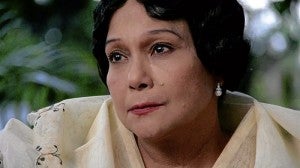 E.R. Ejercito is at it again. After bagging numerous awards for “Manila Kingpin: The Asiong Salonga Story,” he’s all fired up for his 2012 Metro Manila Film Festival entry, “El Presidente.”

He says it’s the product of his blood, sweat and tears. His enthusiasm for the film rubs off on everyone he talks to. The trailer is quite engaging. It’s not your typical, boring history stuff.

Here are excerpts from our interview with E.R.

“Asiong Salonga” was quite a feat. How do you intend to top that via “El Presidente?”

“Asiong Salonga” was an iconic movie. Taking this kind of movie making into the next level would be a true challenge.

“El Presidente,” the story of Gen. Emilio Aguinaldo, is the best and most logical choice. It is a grand production of epic proportions.  The movie making of the true story of our greatest general and legendary hero demands no less. So much of the actions and decisions of Gen. Aguinaldo had been the subject of debate in the last 50 years. It’s about time we tell the true story of a larger-than-life, true Filipino hero.

What was more difficult to make, “Asiong” or “El Presidente,” and why?

While both stories are equally compelling, “El Presidente” was definitely more difficult to make. The script had to be fair and balanced, as it deals directly with our country’s history.  Choosing the right director was very critical. We needed a director who has an extensive knowledge of Gen. Aguinaldo, [is] familiar in directing large productions and personally believes in Gen. Aguinaldo. Direk Mark Meily was the perfect choice. And because of the numerous personalities involved in the Philippine revolution against the Spaniards and Americans, we had to cast over 50 highly professional and accomplished actors and actresses, led by Nora Aunor, Cesar Montano and Christopher De Leon.

The set, costumes, locations and logistics involved in making the Emilio Aguinaldo movie is staggering by all Philippine cinema standards. The research and script preparation alone started in 1998, or over 14 years ago. 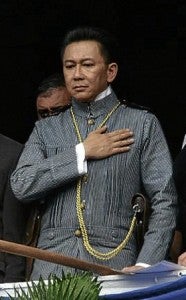 Gen. Emilio Aguinaldo was a visionary and passionate man, a strict but compassionate person, a loving father and husband, a true nationalist, a man of courage when faced with extreme adversity and a proud Filipino. I would like to believe that we both share the same traits and characteristics.

Our only difference was that he lived in a time of war and revolution while I govern in the province of Laguna [as its governor] in a period of peace.

Are you pressured about bagging the best actor award for “El Presidente” after winning so many awards for “Asiong?”

As a professional actor, I owe it to the viewing public to give my role the best performance I could possibly give. But giving the public more than their money’s worth and to produce a quality movie that generations would respect, study and appreciate long after it has been shown is what’s most important for me.

To be nominated as best actor is always a thrill.

What will “El Presidente” correct about our history?

Nora Aunor was and remains to be the consummate dramatic actress that she truly is.  She was always on time at the set, well-prepared and rehearsed, providing a world-class performance before the cameras. It’s as if she never stopped making movies. She never missed a beat in her lines. She was always kind, gentle-hearted and very considerate, not only to me but to the entire production team. Her performance in “El Presidente” was incredible. She was totally consumed in her character as the second wife of Aguinaldo. Working with La Aunor made me step up in my acting performance just to be on par with her performance. She is an inspiration and I very much admire her. She is truly the Superstar.

Tell us about your movie’s theme song by no less than apl.de.ap?

At first, convincing apl.de.ap to accept the project was difficult due to his heavy schedule. After months of discussions, generally appealing to his Filipino heritage to help rectify misconceptions in history, we got apl to watch the initial trailer of the movie. What he saw truly inspired him. He stood up, stepped away from the table, went to a corner in his house and after four hours of furious writing, scribbling and humming to himself, he came up with the theme song!