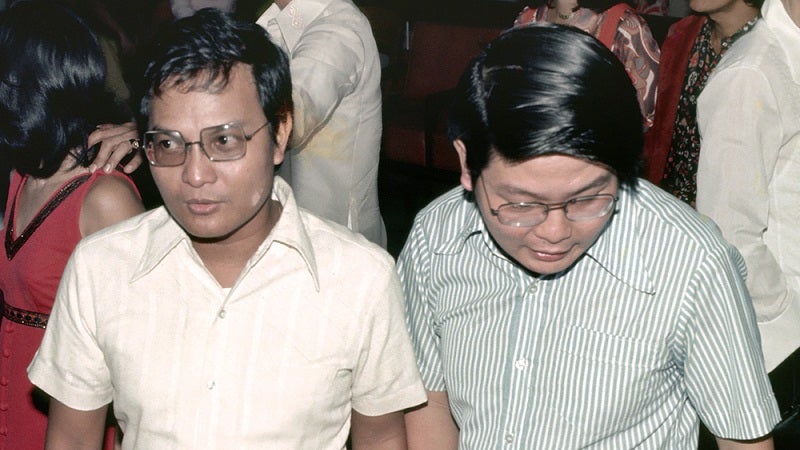 RARE PHOTO OF TWO MASTERS. National Artist Lino Brocka (left) and his cinematographer-producer Mike de Leon joined forces in 1974 for the movie that would alter the course of filmmaking in the country. CONTRIBUTED PHOTO

The nonprofit organization devoted to the preservation of neglected world cinema has reportedly taken a keen interest in the project.

Acclaimed by critics for such films as “Taxi Driver,” “Raging Bull,” “The Departed” and “The Aviator,” Scorsese has adopted film archiving and preservation as a pet advocacy.

On the WCF website, Scorsese explained that “[the] foundation was created to help developing countries preserve their cinematic treasures.”

According to the Film Development Council of the Philippines (FDCP), Scorsese enthusiastically embraced the digital restoration of “Maynila.” “I want a Brocka,” Scorsese reportedly said.

In a rare interview, Mike de Leon, the film’s cinematographer and producer, told the Inquirer that a “few select people and institutions” played crucial roles in preserving “Maynila” through the years.

De Leon, who is emerging from a hiatus from show business for the restoration of the Brocka masterpiece, talked to the Inquirer, the first media outfit to have the chance to interview the reclusive master in a long, long while.

“That this 1975 film still exists in a relatively excellent state is due to the generosity and expertise of LVN Pictures and its color laboratory, Pierre Rissient of France and Tan Bee Thiam of Asian Film Archive (AFA) in Singapore,” De Leon pointed out.

This list will soon include the FDCP and WCF, as Scorsese teams up with De Leon to save Brocka’s masterpiece.

De Leon recalled that LVN Pictures and its color laboratory “ensured that the film negatives were processed to give maximum stability that would last for decades.”

Rissient is largely credited for bringing Brocka to the Cannes Film Festival, where “Insiang” was shown at the Section Parallèle in 1978.

In a fitting homecoming, the digitally restored “Maynila” is being earmarked for a possible premiere at the Cannes Film Festival in May next year, according to the FDCP.

When LVN Film Archive closed shop in 2005, De Leon transferred “the only good print of ‘Maynila,’ along with the restored master negatives of Lamberto Avellana’s ‘A Portrait of the Artist as Filipino’” to AFA in Singapore.

De Leon expressed his gratitude to Tan, founder of AFA.

“My film collection is now kept at AFA. ‘A Portrait’ was produced by my father (Manuel de Leon) and he bequeathed it to me,” the award-winning director said. “LVN had a fully functioning archive in the early 1990s and no matter what people now say to the contrary, there was already a growing awareness of the need for film preservation within LVN in the late 1980s.”

The master negatives at the BFI and the only extant good print at AFA will surely help the experts in restoring “Maynila” to its full glory.

“I am confident that these original film elements of ‘Maynila’ in London and Singapore will provide World Cinema Foundation and  L’Immagine Ritrovata with a solid basis for a pristine restoration of Brocka’s film,” said De Leon.

Clearly, it will take the joint efforts of various institutions from different countries to save “Maynila” from the claws of deterioration.

From novel to movie

Based on a novel by Edgardo M. Reyes, “Maynila” is widely regarded as one of the best works of Brocka.

It is the only Filipino film included in the anthology “1001 Movies You Must See Before You Die,” where it was described by critic Chris Fujiwara as a “low-budget hit … a breakthrough for Filipino cinema … still often regarded as the best Filipino film of all time.”

“The ‘Maynila’ prints [from London and Singapore] are already in Bologna,” De Leon said.

In a way, “Genghis Khan” laid the groundwork for the collaboration between the FDCP and Scorsese’s foundation.

“WCF has been in the forefront of film restoration worldwide,” Santos told the Inquirer.

The FDCP chair explained that “restoring films like ‘Maynila’ can be an effective means to provide the masses with much-needed access to these masterpieces.”

De Leon envisions the “Maynila” restoration as an apt tribute to Brocka.

Santos asserted that Brocka’s message remained as relevant today as it was in the 1970s.

“Brocka has always been known for his discipline and sense of determination to imbue his films with a social purpose. He undertook filmmaking to serve the Filipino people. This may be the reason why he was proclaimed national artist,” Santos said.

Del Mundo, who wrote the script of “Maynila,” agreed with Santos: “More than any other Filipino filmmaker of his generation, Brocka dealt with social and political issues. He was sincerely interested in exposing the injustices in our society, to find genuine solutions.”

Abuel, who portrayed lead star Roco’s friend, Pol, in the film, recalled that “Maynila” was produced only three years after the declaration of martial law.

“It bravely showed the exploitation of the working class, the poverty in the slums. It dared expose the ugly side of Manila, at a time when then-first lady Imelda Marcos wanted to emphasize only ‘the true, the good and the beautiful’ in the movies,” Abuel told the Inquirer.

“It was the height of martial law,” Santos related. “And yet Brocka challenged viewers to confront the actual conditions of oppressed Filipinos in an era characterized by danger and repression.”

Abuel related that Brocka also pushed the cast and crew to grapple with the harsh realities of the martial law regime.

Abuel said Brocka took the actors to an actual construction site, where the Bureau of Internal Revenue building now stands in Quezon City. “It was an immersion exercise. Lino asked us to interview real construction workers. He even encouraged us to buy the laborers’ tattered clothes to wear onscreen.”

Del Mundo said Brocka collaborated closely with the entire cast and crew. “With me, he discussed the additional scenes he wanted to include in the screenplay—particularly, the subplot about male prostitution.”

De Leon agreed. “He was fascinating.”

“He was a pleasant guy.  He never shouted on the set,” Abuel said. “He would only get tense if there was a missing prop.”

“I did a documentary, a 16mm behind-the-scenes look on the making of ‘Maynila.’ Lino was very cooperative,” Del Mundo said.

It was De Leon who asked Del Mundo to make the documentary on the making of “Maynila.”

De Leon, who met Brocka on the LVN lot, had been impressed by the latter’s “Tinimbang Ka Ngunit Kulang,” released in 1974.

“I was amazed. It was a local film but it was different. It made a lot waves then,” De Leon said.

De Leon, who got interested in cinematography, teamed up with his cousin, Severino Manotok, to form Cinema Artists, which would eventually produce “Maynila.”

Manotok thought they would produce a sexy film, as “bomba” (bold) movies were all the rage then. De Leon, however, said that his cousin didn’t object when he chose Del Mundo’s script of the Reyes novel as their maiden venture.

Although he had yet to read Del Mundo’s script, “I thought it would be an excellent opportunity to get away from the TV-type of lighting of the movies at that time.” De Leon wanted to achieve the “available light” look in cinema.

De Leon and Brocka had long conversations before and during the making of “Maynila.”

“I wanted him to direct the film that I wanted to produce,” De Leon said.

Brocka was, however, initially ambivalent about “Maynila.” There were reports that another national artist, Ishmael Bernal, had wanted to turn Reyes’ novel into a movie, too.

But, after reading the script, “Lino called me up immediately. He was ecstatic. He was the one who added ‘Maynila’ to the title.”

Said Santos: “Maynila” is “an acknowledged classic not only here in the Philippines but also all over the world. ‘Maynila’ brought Brocka to the United States. It was shown at Lincoln Center at the New Directors, New Films fest in New York in 1980 and was screened at Walter Reade Theater of Lincoln Center again in 1999.”

That “Maynila” marked the collaboration of Brocka and De Leon makes it a “landmark” film, said Santos. “Two big names in Philippine cinema actually joined forces to come up with a movie that would alter the course of filmmaking in the country.”

Santos, Abuel and Del Mundo agree that “Maynila” should be seen by today’s generation of filmmakers and film buffs.

Del Mundo, who also heads the Society of Filipino Archivists for Film (Sofia), welcomes the restoration of “Maynila.”

Santos lauds President Aquino’s issuance of Administrative Order No. 26 which supports FDCP’s goal to consolidate archiving efforts under the National Film Archive. “It’s high time for the state to step in and assume a much proactive stance in the preservation and repatriation of audio-visual treasures.”