Celso Ad. Castillo in the eyes of his son 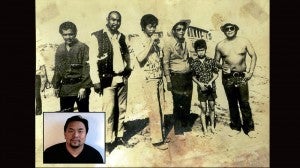 CHRISTOPHER Ad. Castillo (inset photo) when he was a young boy beside his late father, director Celso (right) on the set of “Return of the Dragon”

The semi-autobiographical film that Celso had long planned to direct and act in (he was to play the title role) would have been his chance to finally work with Nora Aunor. We asked Celso’s son, Los Angeles-based filmmaker Christopher Ad. Castillo, about the fate of this project and another film that would have allowed the young Castillo to direct his esteemed director dad.

Just a few weeks ago at an LA event, we were chatting with Christopher, a Pepperdine University graduate, about his father. When Celso passed away recently, Christopher wrote and posted a moving open letter to his dad on Facebook that was shared many times by his friends, as well as admirers of the master filmmaker.

Christopher—who wrote, shot and directed “The Sky Is Falling” and directed music videos, including two for “Jazzipino” singer Charmaine Clamor —was formerly an actor in Manila. He is Celso’s eldest son. He told us that he has 14 siblings (“two passed away”) and that his father had three wives.

Christopher has been based in LA since 1980 but went home from 1986 to 1990 to become an actor. With the passing of his dad, Christopher said, “I’m at the crossroads right now to see what I want to do. I have hard deci    sions to make.” He flew home to attend the funeral services for his father.

Below are excerpts from our e-mail interview with Christopher:

How emotional and cathartic was it for you to write that open letter-tribute to your father? 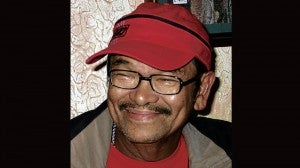 CELSO Ad. Castillo was a wonderful father, according to his son.

I knew right after I heard the news that I was going to write a letter. I could not answer everyone’s concern, so this was the only way that I could reach out to everyone to let them know how I felt and who was this man.

I cried as the words poured out. And the regrets came right after. Should I have called him more, said ‘I love you’ more, been a better son? The letter was finished within 10 minutes.

You were planning to direct your father in a film.

I have a project with producer Alemberg Ang that I am going to direct in March 2013—a psychological horror-thriller in which my father would have played the role of a grandfather holding his grandson hostage. There’s a major opening sequence that catapults the story. It was something I was looking forward to doing, a dream come true for me.

My father directed me as an actor in two films, and I was his assistant director for two other films. I learned everything from him, and I was very excited to show him what I’ve learned … I wanted to see if I was up to the task … In this sense, I am heartbroken that I will never find out.

What are your plans now about this film?

My film continues and it will be with a heavy heart that I will make it, especially shooting those scenes that I wrote for him. But I also come in with an almost maniacal enthusiasm and drive to make it one of the best films ever. And the people involved in it feel the same way as I do. We all made a pledge to do it for my father.

You were going to write what would have been, as you described it, your father’s swan song, “Ang Lalaking Nangarap Na Maging Nora Aunor.”

It was going to be his entry to Sineng Pambansa … He asked me if I thought he was too old to play the role. I advised him to add the concept of “Cinema Paradiso” where a retiring filmmaker, Salvatore, comes home and reminisces about his life. Then he could get a great young actor to be his doppelganger in the flashbacks.

It would be semi-autobiography—his gift to Philippine cinema. He was very excited to work with Nora Aunor. He always felt that his body of work was unfinished because of this project … He asked me to start writing it. He was gone two days later.

How did the idea for this film begin? Did he admire Nora Aunor?

He had done all those classics with Vilma Santos, so it was time to work with Nora whom he admired enormously … He wanted to see to what artistic level he could drive her and attain with her…

He also admired Roman Polanski. He watched all his movies and read his autobiography. I remember going to the movies with him to watch “The Tenant.” I think that was where the seeds of the Nora film were planted. It’s about a gay director obsessed with Nora and who is slowly descending into madness.

Do you plan to proceed with this project?

It never crossed my mind to continue the Nora film until about two days after my father passed away. It has been on my mind a lot lately, and I think he would want me to proceed with it…

What did he tell you about “Bahay ng Lagim,” his film that will be shown in February next year?

I did not discuss this film with him so I don’t have any idea.

Will you attend Cinemanila’s tribute to your father?

Tikoy Aguiluz (Cinemalaya head) reached out to me the day my father passed. Tikoy told me they had a moment of silence at a Cinemanila meeting and that they were going to honor him on opening night … My brothers, sisters and I will be there to celebrate with everyone.

What are your earliest memories of your father as a filmmaker?

I remember he was typing a lot at home while I played with imaginary friends. My parents eloped and we didn’t have much then, and they both refused to ask help from their parents. Those were very lean times. My father’s career had not taken off and my mother was a teacher.

Then “Nympha” happened, and I remember driving around the different theaters with my father and seeing the lines around the block. I knew then that our lives had changed.

“Burlesk Queen” has always been my favorite and, personally, I think it is the greatest Filipino film ever and one of the best in the world …  This was my father’s call for art to rise above everything else in cinema.

He was a wonderful father … always with that smile and money for me to go to the movies. He was a busy man, a moody artist that sometimes.

I wasn’t sure if I could speak to him … My father was different.  Our life was not normal, and that was fine with me.

He started as a komiks illustrator.

I saw him draw later on as a filmmaker and he was amazing. His paintings are all over our ancestral home.

Many of the tributes mentioned his humor.

His funny stories were all about show biz. The industry is a funny world with funny situations.

He was known as a ladies’ man and for his colorful life.

He loved his leading ladies, and he loved his women. He was a man’s man. He fought in restaurants, punched actors, got busted for weed and was very outspoken … That was part of his image and, aside from his films, I think those were the reasons why he was larger than life.

You wrote that, over two decades ago, your father made the difficult and painful decision to choose either his family or art. He chose his art. What reason did he tell you?

We were drunk. I was driving and he was next to me, and we had that talk (in San Francisco). I was surprised he brought it up because I never asked or showed any negative emotions towards what happened. But I’m glad he talked about it.  It was time for him to forgive himself.

In a 2008 interview with the Inquirer, he said that he had “mellowed considerably.”

Did you feel that, too?

Yes, he had mellowed a lot due to his conversion to Islam. In the early ’90s, he disappeared for months in Malaysia and I would cry some nights since no one knew where he was. Then he appeared one day, different and with a mellow resolve, a cooler head. A changed man in temperament but still very much the true artist. He gave me his Koran, which is my prized possession.

What did he tell you about the autobiography that he was writing?
He didn’t tell me much but I have an advance copy and I’m looking forward to reading it. He was very secretive about it. I think it took a lot out of him to get all the memories out of his head and into paper.

Are there some things that the world does not know about your father?

He liked to work with students. Not just film students. He would always lend his time to go to schools and talk about art, how it pertains to life, how they can better themselves and achieve their dreams. He was a very nice and giving human being.

How will you cope with the pressure that some people’s expectations might have of you?

I have a duty to myself, first and foremost, to be the best I can be in making films. So the pressure comes from myself and not other people.

My father is my hero and I’ve seen him deal with pressure. He just rose above it. I know I have that in me. After all, I am my father’s son.