PSY's riches from 'Gangnam Style' not made at home | Inquirer Entertainment

PSY’s riches from ‘Gangnam Style’ not made at home 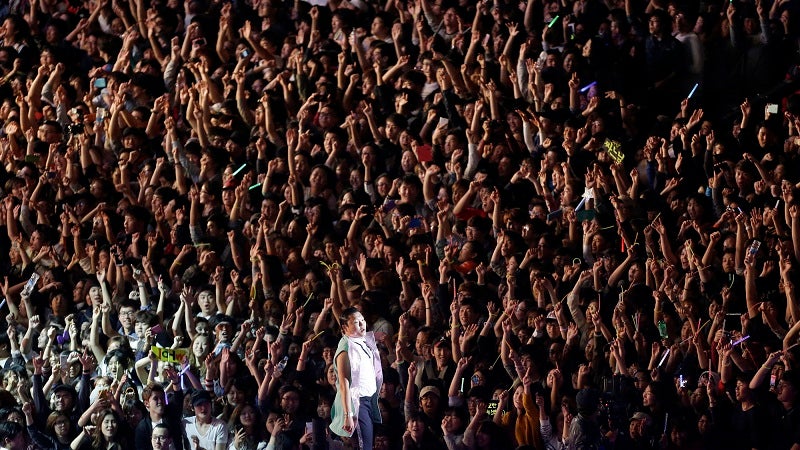 In this Oct. 4, 2012 file photo, South Korean rapper PSY, who sings the popular “Gangnam Style,” performs during his concert in front of Seoul City Hall in Seoul, South Korea. As “Gangnam Style” gallops toward 1 billion views on YouTube, the first Asian pop artist to capture a massive global audience has gotten richer click by click. So too has his agent and his grandmother. But the money from music sales isn’t flowing in from the rapper’s homeland South Korea or elsewhere in Asia. With one song, 34-year-old Park Jae-sang — better known as PSY — is set to become a millionaire from YouTube ads and iTunes downloads, underlining a shift in how money is being made in the music business. AP/Lee Jin-man

SEOUL, South Korea — As “Gangnam Style” gallops toward 1 billion views on YouTube, the first Asian pop artist to capture a massive global audience has gotten richer click by click. So too has his agent and his grandmother. But the money from music sales isn’t flowing in from the rapper’s homeland South Korea or elsewhere in Asia.

With one song, 34-year-old Park Jae-sang — better known as PSY — is set to become a millionaire from YouTube ads and iTunes downloads, underlining a shift in how money is being made in the music business. An even bigger dollop of cash will come from TV commercials.

From just those sources, PSY and his camp will rake in at least $8.1 million this year, according to an analysis by The Associated Press of publicly available information and industry estimates. But for online music sales in South Korea, he’ll earn less than $60,000.

Here’s how it works.

“Gangnam Style” with its catchy tune and much imitated horse-riding dance is the most-watched video on YouTube ever.

The viral video has clocked more than 880 million YouTube views since its July release, beating Justin Bieber’s “Baby,” which racked up more than 808 million views since February 2010. PSY’s official channel on YouTube, which curates his songs and videos of his concerts, has nearly 1.3 billion views.

TubeMogul, a video ad buying platform, estimates that PSY and his agent YG Entertainment have raked in about $870,000 as their share of the revenue from ads that appear with YouTube videos. The Google Inc.-owned video service keeps approximately half.

PSY and YG Entertainment also earn money from views of videos that parody his songs.

Google detects videos that use copyrighted content. Artists can have the video removed or allow it to stay online and share ad revenue with YouTube. In the last week of September when “Gangnam Style” had around 300 million views, more than 33,000 videos were identified by the content identification system as using “Gangnam Style.”

But since YouTube can be accessed from all over the world, wouldn’t Asia be responsible for a significant chunk of the $870,000? The countries with the second- and third-highest views of the video are Thailand and South Korea.

“Ads rates vary depending on which country the video is played. Developed countries have higher ad rates and developing countries lower,” said Brian Suh, head of YouTube Partnership in Seoul.

And the country with the most views of “Gangnam Style?” The United States.

“Gangnam Style” has been downloaded 2.9 million times in the U.S. and has been the No. 1 or No. 2 seller for most weeks since its debut, according to Nielsen SoundScan.

The song sells for $1.29 on Apple’s iTunes Store, the market leader in song downloads. Apple generally keeps about 30 percent of all sales, so the PSY camp could be due more than $2.6 million.

How much PSY keeps and how much goes to his managers, staff and record label is unclear. South Korean industry insiders said PSY likely gets 70 percent and YG Entertainment 30 percent for U.S. downloads.

But earnings from downloads in PSY’s homeland are far from an embarrassment of riches.

South Koreans pay less than $10 a month for a subscription to a music service that allows them to download hundreds of songs or have unlimited access to a music streaming service. That makes the cost of a downloaded song about 10 cents on average. The average price for streaming a song is 0.2 cent.

PSY’s cut for downloads is 14 percent. That falls to 7.5 percent for streamed songs. Yes, 7.5 percent of 0.2 cent. And that’s before PSY’s “Gangnam Style” co-composer take his share. The biggest cut goes to his agent and online retailers.

According to South Korea’s national Gaon Chart, “Gangnam Style” was downloaded more than 3.6 million times and streamed around 40 million times as of November. That adds up to a little more than $61,000.

It’s likely the fast-fading music CD industry generated even smaller revenue. PSY’s 9 percent cut from sales of 102,000 CDs in South Korea would earn him $50,000 or more, according to an estimate by Kim Dong-hyun, a senior manager at Korea Music Copyright Association.

As for many other parts of Asia, illegal downloads and pirated CDS are so pervasive that only a small minority are willing to pay up for the legal versions.

PSY has been jetting around the world, performing on shows such as “The X-Factor Australia” and NBC’s “Today Show,” but such programs usually cover travel costs and not much else, said Gary Bongiovanni, editor-in-chief of concert trade magazine Pollstar.

It is television commercials that are the big money spinner for the most successful of South Korea’s K-pop stars. PSY has been popping up in TV commercials in South Korea for top brands such as Samsung Electronics and mobile carrier LG Uplus.

The money is cool. The products not so much. PSY is now the face of a new Samsung refrigerator and a major noodle company.

A fact little known outside South Korea is that PSY’s father, uncle and grandmother own a combined 30 percent of DI Corp., a company which makes equipment that semiconductor companies use to make computer chips.

It’s a stretch to plausibly explain how the success of “Gangnam Style” will boost DI’s profits but that doesn’t matter to the South Korean stock market. Perhaps inspired by the pure power of pop, DI shares surged eightfold from July after PSY’s hit reached No. 2 on the Billboard Hot 100 and No. 1 on the U.K. singles chart.

The share price has fallen since then but is still about double what it was before the release of “Gangnam Style.”

PSY’s agent YG Entertainment has also done well. Its share price is up about 30 percent since mid-July. The value of CEO Yang Hyun-suk’s stake has swelled to about $200 million, making him among the richest in South Korea’s entertainment industry.

The question now hanging over PSY is whether he will replicate the blockbuster success of “Gangnam Style” or end up remembered as a one-hit wonder.

“When this slows down, what comes next for PSY?” said Nielsen analytics vice president David Bakula. “Is it the evolution of a new musical style, something audiences are going to be craving en masse, or is it something that’s just a passing fancy?”

Analysts say “Gangnam Style” alone will not be enough to propel PSY into the ranks of musicians such as Adele and may not even be enough to make him the top-grossing K-pop star. That will depend largely on his upcoming album, which PSY said will be released in March.