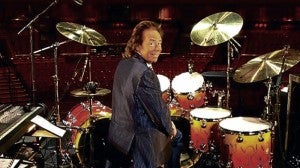 NIGEL Olsson: “Elton and I are very happy working together.” photo:rob shanahan/drummerworld.com

When Elton John performs on Dec. 8 at the Smart Araneta Coliseum, take note of the guy who will play the drums. His name, Nigel Olsson, may not ring a bell to most young music fans, but he’s acknowledged for his vital role when Elton first came to the United States in August 1970.

Four months earlier, Elton’s self-titled second album (which contained “Your Song”) was released. Elton’s record label boss at that time, Dick James, was confident that he had a very good album to sell and sent a copy to his American counterpart, Russ Regan of Uni Records.

Russ was so impressed that he asked Elton to fly to the US and play to gain wider attention. Booked for five nights at Los Angeles’ famed club, The Troubadour, Elton attracted the creme de la creme of LA’s music scene.

Playing as a trio with Nigel and bassist Dee Murray, Elton’s performance was hailed by critics as the arrival of a great new talent. Nigel went on to become a regular member of the Elton John Band.

The Inquirer had an e-mail chat with Nigel prior to his arrival with Elton in Manila.

That five-night stint at The Troubadour was a make-or-break situation in Elton’s career. What was it like playing at that time?

It was super exciting because we had been together as a band only for a short while. The mood was very upbeat, but a bit nerve-wracking because there were people in the audience whom we’d been influenced by, like Leon Russell, Stephen Stills and other artists. (LA Times music critic) Robert Hilburn’s review sparked quite a lot of interest in the band.

The band was so hardworking and prolific, especially during the recording of Elton’s albums from 1970-75. Why do you think the group was able to accomplish so much in such a short period?

Elton’s music and (lyricist) Bernie Taupin’s words were, and still are, so inspiring and we were all on the same wavelength in and out of the studio.

You and Murray left the band in ’75. What really happened? Were the two of you fired, and if so, why?

There were musical differences and we went about our separate ways. I recorded three successful albums. I moved to LA and was very busy in the studio with various artists. In later years, I pursued other endeavors like auto racing, which is another one of my passions.

But you rejoined Elton’s band in 1980. Was there any change in your personal and business relationship with him?

Elton and I have picked up where we left off and we are very happy working together.

What Elton John songs did you find difficult to play, and why?

I don’t think any of Elton and Bernie’s songs are difficult. As I mentioned before, we are so on the same wavelength. It’s always been very natural and mutually respectful.

You’ve said in interviews that you admire Ringo Starr’s drumming style. Who else have influenced your own playing?

What’s the best way to become a good drummer?

It can be different for anyone. I am self-taught and cannot read music. I play from the heart and the low end of the piano. I don’t think of myself as a technical drummer at all.  I am a great timekeeper, which is what I’m most known for, and I try not to overplay. It’s what I leave out that is the key to my own style.

I look forward to playing in Manila and I hope everyone will enjoy our show there.