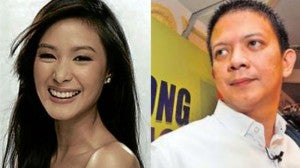 MANILA, Philippines – Senator Francis “Chiz” Escudero’s love life was caught in the middle of a heated debate in the Senate on whether or not to drop the words “safe and satisfying sex life” in the definition of the Reproductive Health bill.

When Escudero stood up on the floor and expressed his “discomfort” over the use of the words in the bill, Senator Pia Cayetano asked if his problem was with the word “safe” or “satisfying.”

Escudero said he likes both but said there was no need to put it in the law.

“What would you like your wife or our daughter to have?  Safe or satisfying sex life?  Make a choice,” Cayetano, main proponent of the bill, asked  Escudero.

“And your wife?” Cayetano asked again.

“I would not know,” said Escudero, who just got annulled from former  wife, Christine.

“My question is what would you want?  You don’t know if you would want your wife to have a satisfying sex life?” Cayetano pressed.

But Cayetano went on: “I’m speaking in a hypothetical…I assume you will have a wife again. As I know, you are currently in love again.”

“That’s a totally different matter,” said Escudero, who had admitted his affair with actress Heart Evangelista.

Before Escudero, Senator Sergio Osmeña also asked Cayetano if the removal of the words would lessen the satisfying sex life of a person.

“If we delete it, does that mean we will not be able to have a happy and healthy sex life any longer?” Osmeña asked.

Senate Majority Leader Vicente Sotto III, a staunch opponent of the bill, questioned the need  to  include  the words in the law when it is already being done.

“May I ask wala ba tayo ngayon nyan?…Bakit kelangang ilagay pa sa batas yun.. Ang sagwang tingnan sa batas e (May I ask, do we have nothing like that? Why do we need to include that phrase in the law. It’s not pleasing to read that in the law.) Tingnan nyo, in the law you will find this statement ‘safe and satisfying sex life.’ I will not be part of that law.”

Senate Pro Tempore Jose “Jinggoy” Estrada also questioned the need to include the words in the law,  when it is expected that  a couple who will have sex will be satisfied.

But Cayetano did not agree, saying she spoke with so many women and men who were not satisfied.

“Why are they not satisfied…? Because of the performance of the men?” asked Estrada to which Cayetano quickly answered, “Most likely.”

After the exchanges, the Senate voted on Cayetano’s motion to retain the words in the bill with 11 senators voting in favour of it and only six against it.

It was Senate President Juan Ponce-Enrile, a staunch oppositor of the bill, who proposed the removal of the phrase.

Read Next
A. Lipin, December 5, 2012
EDITORS' PICK
Metro Manila’s daily COVID-19 growth rate drops to 2% — Octa Research
Over 3 Million worth of prizes to be won at Smart Padala’s SENDali Manalo Promo!
SMDC’s Bloom Residences: A master planned community that cares for your health and wellness
What to expect as Metro Manila starts ‘no vaccination, no ride’ policy on Monday
COVID-19 cases in PH pass 3.2 million mark with 37,154 new cases — DOH
Upsilon, Unilever give ‘real talk’ on climate change crisis
MOST READ
IATF protocols now apply to travelers who arrived on or before Jan. 13
‘Not my loss’: Did Kris Aquino just comment on her breakup with Mel Sarmiento?
Thailand records first Omicron death
Tito, Vic and Joey still not quitting, breaking trends as they celebrate 50th year in the biz
Follow @MAgerINQ on Twitter
Don't miss out on the latest news and information.