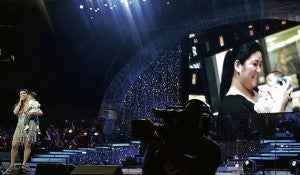 SONGBIRD shows off son Nate onstage and on a video wall during her November 16 concert. PHOTO BY GIRLIE RODIS

Singer Regine Velasquez has turned down offers to sing in corporate shows and private functions to ensure she’s in tip-top shape when she restages her “Silver” anniversary concert in January at Mall of Asia (MOA) Arena.

“We want to make sure Regine gets enough rest,” said her sister and talent manager Cacai Velasquez-Mitra. “That’s why we canceled a lot of her commitments, especially those that would require her to sing…”

Cacai, in a phone interview with the Inquirer on Tuesday, added that she was still awaiting word from SM Corp.—which offered the venue for free—for the exact date of the show.

“Our target date is January 5. We’re looking into the possibility of inviting new guest performers, but it’s hard for them to commit to us since we don’t have an assured date from SM,” she pointed out.

She said guest performers like Lani Misalucha and Michael V. would no longer appear at the restaging of “Silver.” Misalucha, who is based in Nevada in the United States, will leave Manila on January 3. Michael V. also has a scheduled trip to the US in January.

Regine had to cut short her anniversary show at MOA Arena on November 26 due to flu and a hoarse voice. She apologized to her supporters and promised to hold a free concert soon.

Cacai added that while Regine would still be doing the same production numbers the audience saw at the first concert, there would be additional songs.

“Since this will be a free show, it will be too expensive for us to create new production numbers,” she explained. “They will still hear her sing her signature tunes. There were still a lot of numbers that the audience didn’t get to see.”

During a recent press conference hosted for Regine by Belo’s Sexy Solutions, she promised that the repeat concert would be more exciting.

Regine said more sections at the MOA Arena would be opened to accommodate more people.

She likewise said that holders of old ticket stubs would be asked to go to the concert venue on a specific date to have them replaced.

“I’m overwhelmed by the outpouring of support,” she said. “I’m so touched by people who volunteered to help mount the free concert. Right now, we’re talking with other potential sponsors.”

“There were some who went to my concert only to see me fail, but even they couldn’t think of anything bad to say about the show,” she said.

The singer-actress said all her efforts are now focused on preparing for the show. “I will be performing for two to three hours. I will really need all the energy.”