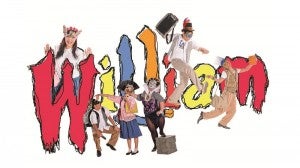 ‘William’ opens on August 12 at the PETA Theater Center with shows every Friday, Saturday and Sunday.

MANILA, Philippines—For many educators, teaching Shakespeare has been the curricular equivalent of serving children ampalaya (bitter melon). Young Filipino’s know that it is “good for them” but refuse to take a bite.

Luckily, teachers and parents can now help students conquer their fear of Shakespeare. Much like how mothers cleverly sneak vegetables into their family’s daily diet, Shakespeare can now be made more exciting and appetizing for the youth.

For its 44th Theater Season, Philippine Educational Theater Association (PETA) produces modern, educational and entertaining plays and events that can help students and non-students to rediscover and understand Shakespeare.

What better way can students shake off their fear of Shakespeare than have their chance to re-invent the Bard outside his usual big frilly collar and stuffy pose? PETA encourages professional and amateur artists to draw their own version of Shakespeare that will appeal to the youth.

The winner of PETA’s “Hu Art Daw?” design challenge will become PETA’s official icon for its 44th Theater Season and shall appear in all of PETA’s posters, flyers, merchandise and other marketing collaterals.

With the popularity of rap and hip-hop among teenagers at an all-time high, and with Shakespeare being a master of rhythm, PETA creates an original play that takes rap to breakdown Shakespeare.

“William’s” characters represent usual High School stereotypes: there’s Erwin, the shy boy in class; Sophia, the not so smart pretty lass; TJ, the bad boy athlete; Richard, the eager student leader; and Estela, the honor student. As much as these students are part of different cliques, all of them struggle to understand Shakespeare and his works – some find his poetry difficult to understand, others are simply bored with the subject and most simply don’t find meaning in studying Shakespeare. Their lack of interest in the subject resulted to grabbed research and reports from the Internet, which enraged their rather passionate English teacher, Ms. Martinez.

Punished due to their “insolence to Shakespeare”, Ms. Martinez requires them to present a scene of a Shakespearean play, which allows them to rediscover how Shakespeare characters and stories are parallel to their life situations.

“William” opens on August 12 at the PETA Theater Center with shows every Friday, Saturday and Sunday at 10:00am and 3:00pm until September 25. PETA’s Artistic Director Maribel Legarda directs “William”.