Actor is producer of 2 indies 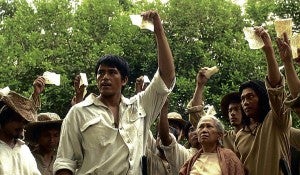 VARGAS portrays Andres Bonidacio in the latest film that he also produced in collaboration with director Richard V. Somes.

Actor Alfred Vargas was once a “closet” indie producer.

Not a lot of people know that he was among the producers of Auraeus Solito’s latest Cinemalaya winner, “Busong,” which premiered at the Directors Fortnight in Cannes last year and continues to win awards in film festivals abroad.

“I was a silent partner,” he told the Philippine Daily Inquirer. “Auraeus is a friend and I loved ‘Ang Pagdadalaga ni Maximo Oliveros.’ I’m proud to be part of ‘Busong.’”

He precisely set up Alternative Visions for his indie endeavors.

For his company’s second project, he teamed up with director Richard V. Somes for “Supremo,” which chronicles the life and death of revolutionary hero Andres Bonifacio. For “Supremo,” which opens on Dec. 5, he took a more “hands-on” approach as producer.

“I was involved every step of the way, from research and script development to hiring the right people,” he pointed out.

He admitted that producing a historical epic on a shoestring budget can be challenging.

“We had to realistically depict history with limited resources,” he said. “That’s where Richard came in because he’s an award-winning production designer.”

For their efforts, “Supremo” was recently graded “A” by the Cinema Evaluation Board.

“Direk Mario’s style was more lyrical and poetic. It was inspiring to work with him. He was a genius,” he said.

In contrast, Somes was gung-ho and gritty. “We felt like real Katipuneros on the set. We had to engage in guerrilla filmmaking. We had to be tough.”

Seems he has imbibed Bonifacio’s defiance and daring as producer, too, for he has no fears about his latest film’s theatrical release.

“When I decided to produce ‘Supremo,’ financial gain was not my priority,” he said. “I look at it as a legacy film, our passion project, our modest contribution to society.”

He hopes his two daughters, and other young people, would heed Bonifacio’s example. “I admire Bonifacio’s intense love for country, his courage and determination. I hope that today’s Filipinos would learn from the lessons of his life.”

He explained that Bonifacio’s message remains as vital and relevant until now.

“Even after a hundred years, our country still has the same problems. We, Filipinos, still pull each other down. We are still divided as a people,” he asserted.