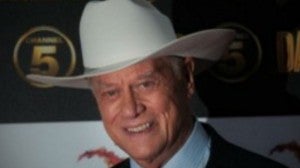 LOS ANGELES — Larry Hagman, who shot to worldwide fame for his portrayal of the oilman villain J.R. Ewing in the US television series “Dallas,” has died at the age of 81 after losing a battle with cancer, his family said Saturday.

“When he passed, he was surrounded by loved ones,” the family said in a statement. “It was a peaceful passing, just as he had wished for.”

Hagman died late Friday afternoon at Medical City Dallas Hospital from complications from throat cancer, according to the statement.

No other details were given.

Hagman first became a TV star in 1965 in the comedy series “I Dream of Jeannie,” in which he played an amiable astronaut whose life is plagued by a beautiful blonde portrayed by Barbara Eden.

But it was not until 1977, when the soap opera “Dallas” came along, that his Hollywood career really took off.

“Dallas” told the story of a mega-rich Texas family, in which Hagman played the role of corrupt and unscrupulous millionaire J.R. Ewing, the man everyone loved to hate.

With his ever-present Stetson and a smile that hid constant scheming, JR powered the series that ran for an unprecedented 13 seasons from 1978 to 1991, becoming one of the highest rated TV shows of all time whose popularity reached well beyond the US.

He lived and worked in Southern California. But since the series were set in Dallas, Hagman’s name became synonymous with Texas.

He hosted “Lone Star,” an eight-part documentary series on the history of the state for PBS television, which aired in 1985 and was timed to celebrate the 150th anniversary of Texas declaring itself an independent republic, a short-lived status before it joined the United States.

In 1992, Hagman was diagnosed with cirrhosis of the liver, which later developed into a cancerous tumor.

Three years later, he underwent a liver transplant that saved his life.

Once known for his partying ways, Hagman gave up drinking and smoking following his liver diagnosis and in later years became an anti-smoking campaigner.

In November 1996, the actor starred in “Dallas: JR Returns”, a two-hour television movie for CBS television, as well as in the network’s one-hour drama series “Orleans”.

Hagman returned to his role as J.R. Ewing in TNT’s continuation of “Dallas,” which began in 2012, but his failing health made it difficult for him to continue.

Hagman was born in Fort Worth, Texas on September 21, 1931 the son of actress Mary Martin and attorney Ben Hagman.

When his parents divorced in 1936, he was sent to Los Angeles to live with his grandmother.

After his grandmother’s death, Hagman, who at the time was only 12, went to New York to live with his mother, who had remarried and was pursuing a successful Broadway career.

After a year at Bard College in Anandale-on-Hudson, New York, Hagman decided to follow in his mother’s theatrical footsteps.

His first professional stage experience was with the Margo Jones Theatre-in-the-Round in Dallas, Texas. He next appeared in the New York City Center production of “Taming the Shrew.”

Trying to build up on these first steps, Hagman moved to Britain as a member of the cast of his mother’s big stage hit, “South Pacific,” and stayed there for five years.

In Britain, he also joined the US Air Force, where he produced and directed several shows for members of the military service.

For his performance as J.R. Ewing, Hagman was nominated for two Emmy Awards for outstanding lead actor in a Drama Series in 1980 and 1981, but did not win. He was also nominated for four Golden Globes between 1981 and 1985.