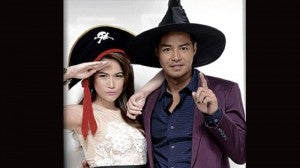 Usually cast as a hunky leading man in TV series and films, actor-model Zanjoe Marudo took on the challenge of playing a gay role in the latest Star Cinema offering,  “24/7 in Love.”

Zanjoe confessed he had difficulties portraying his character Butch, a fashion-savvy gay man who falls for his best friend Belle (Bea Alonzo).

“I was clueless (about playing a gay character) the first few days of shooting,” he said at a recent press con. “Good thing there were a lot of gay people around the set—the makeup artists and hairstylists. I observed them and tried imitating them.”

Zanjoe also related that Bea, his real-life girlfriend, introduced him to gay lingo. “I asked them to help me with my character, and eventually, my actions became more natural,” he said.

Though he was a little hesitant to take on the role, Zanjoe said the trust his friends and colleagues put in him encouraged him. “I feel proud that there are people who believe in my skills.”

“24/7” is Zanjoe’s first project with Bea as a real-life couple. There was a bit of awkwardness, even nervousness, the 30-year-old admitted. “Unlike an acting newbie like me, Bea has already proven herself as an actress. And I thought it was going to be intimidating.”

But after five whole days of filming under dire ctor Mae Cruz, Zanjoe said that working with Bea turned out to be a fun and enjoyable experience. “She put me at ease because I knew that she wouldn’t judge me. I knew that I could learn from her.”

“24/7 in Love” is part of the 20th anniversary celebration of Star Magic. Codirected by Mae Cruz, John D. Lazatin, Dado Lumibao and Frasco Mortiz, the film opens on Nov. 21.