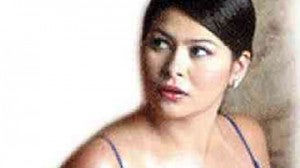 LESSON LEARNED. A libel case filed against actress and former Quezon City councilor Aiko Melendez by her ex-boyfriend Patrick Meneses has made her realize to always maintain good ties with her exes. INQUIRER FILE PHOTO

Aiko Melendez says she’s leaving it to legal counsel Adel Tamano to talk about the details of the libel case filed against her by former boyfriend and Bulacan, Bulacan, Mayor Patrick Meneses.

At a recent media gathering to launch her new afternoon drama show, “Reputasyon,” Aiko was asked to shed light on the case that stemmed from her supposed earlier Twitter posts—in which she allegedly questioned Patrick’s sexuality.

“In this life, nothing is impossible,” Aiko said, raising the possibility of an out-of-court settlement.

Asked if she could ever be friends with Patrick again, Aiko said: “It would probably take a while … we really can’t tell.”

She’s thankful to her former husbands, Jomari Yllana and Martin Jickain, for “lifting me up during times when I was really down.”

Jomari is dad to her son Andrei, 13; and Martin, to her daughter Marthena, 5. (Her marriage to Jomari was annulled in 2003. She is awaiting the decision of her 2008 petition to nullify her marriage to Martin.)

“These men were there to fight for me,” she told Inquirer Entertainment. “They defended me. They both said ‘Aiko would never do anything like that.’”

One thing she learned from her relationship with Patrick, Aiko said, was that she should always maintain good ties with her exes.

Aiko said she fought depression through prayers and diverted her attention to her kids and work.

“God has been really kind to me,” she said. “Shortly after the controversy, I was offered to do ‘Maalaala Mo Kaya,’ which my bosses said was one of the highest-rating episodes of the show. Then I was told I’d be part of ‘Reputasyon.’”

Aiko said she now draws strength from her children. “You get a different kind of joy and contentment from your kids. You may have broken up with two or three boyfriends, but your kids will never leave you. They will remain loyal to you and will stick with you no matter what.”

Back in show biz after serving her constituents in Quezon City, Aiko clarified that she did not sign an exclusive contract with ABS-CBN. “I’m free to work with any network but only after I finish ‘Reputasyon,’” she explained. “I think being a freelancer is better. You have more control with your career.”