Creed promises another ‘Thrilla in Manila’ 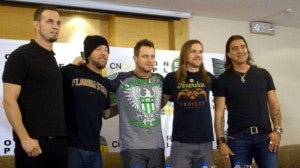 Post-grunge rock band Creed poses for the media after their press conference Saturday, Nov. 11, 2012, a day before their concert at the Smart Araneta Coliseum. TETCH TORRES

MANILA, Philippines – Post-grunge band Creed is excited to rock Manila on Sunday night at the Smart-Araneta Coliseum, which vocalist Scott Stapp said was a venue with an “awesome history.”

“Come see our own version of ‘Thrilla in Manila’,” Creed lead singer Scott Stapp said at a press conference Saturday at the Crowne Plaza Hotel in Ortigas, Pasig City.

“I am excited to play in that venue. Awesome history there,” said Stapp who is also a fan of boxing champion Manny Pacquiao.

Araneta Coliseum was the venue of “Thrilla in Manila”, the third and final boxing match between Muhammad Ali and Joe Frazier in 1975.

This is the first time Creed will perform in Manila, Stapp said, adding he is looking forward to hear their Filipino fans sing and rock with them on Sunday.

“We have been told that this is a nation with very tremendous musical talent and I am very excited tomorrow [Sunday] to hear everyone sing and hear those voices,” Stapp said.

Their first three albums, My Own Prison, Human Clay and Weathered have all gone multi-platinum in the US.

The band has also won a Grammy Award for Best Rock Song for the song “With Arms Wide Open,” the song Stapp wrote upon learning that he was going to be a father. The song, believed to have spiritual undertones, also became the name of the charity foundation for women and children headed by Stapp and his wife Jaclyn.

When asked what their inspiration for their albums was, Tremonti said that a period in his life has played a great factor.

“There has to be a passion for music. It is kind of a building process,” bassist Brian Marshall said.

Stapp, on the other hand, said the inspiration for their music “starts with my fatih in God, everything starts there.”

In their music, Stapp said, “it’s not always expressing the good times but the struggles and the journey and trying to understand life, why I feel [about] certain things.”