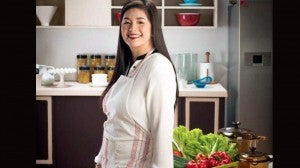 Regine said an episode of the American talk show “Oprah” a few years back convinced her that she was suffering from the learning disability that affects a person’s reading skills.

“I finally understood why I had so much difficulty in school,” Regine said during a dinner she hosted recently for a select group of reporters at her Quezon City home. “I remember writing but not distinguishing the letters. I was good at memorizing but couldn’t spell. I wondered how I could be so dumb with such a memory.”

Regine said her learning problem could be the reason that she hated school. “My schoolmates laughed because I had trouble reading and had problems with numbers.”

She didn’t say whether or not she consulted a doctor about the condition. However, she did say she developed a “coping mechanism.”

She is happy that most cell phones have auto-correct features, so her text messages are correctly spelled. To learn songs, she would listen to the recording for about four times. “After that, I already know the melody and lyrics.”

Regine added: “As for dialogues or spiels, I memorize how they are written in the script. So if you put them on a TelePrompTer and jumble their sequences, I won’t be able to read them.”

During the get-together, the singer also related her husband Ogie Alcasid’s frustrations as chairman of the Organisasyon ng Pilipinong Mangaawit (OPM). “For example,” she noted, “seeing to it that foreign performers pay the right taxes is no longer the job of OPM, but Ogie just had to say his piece on it to protect local artists.”

Regine, who gave birth last year at age 40, said she was praying for more kids but “leaving everything up to God.”

She recalled the day Ogie learned she was pregnant. “I was in the bathroom and he was making calls. When I came out, everyone already knew, including my network bosses.”

Regine said Ogie and their child Nate are similar in many ways. “Our son has his dad’s mannerisms. They also have the same smile, high cheek bones and face shape. The rest of his features, he got from me—

eyes, nose, pouty lips and the way his forehead gets wrinkled when he’s occupied with something. He actually looks like a young Mang Gerry (Regine’s dad)!”

These days, Regine  hosts “Sarap Diva” every Saturday at 9:30 a.m., and “Hot TV” every Sunday afternoon, both on GMA 7. She is also a regular of the Sunday noontime variety show, “Party Pilipinas.” On November 16, she will celebrate her 25th anniversary in the biz with a concert titled “Silver,” at the SM Mall of Asia Arena in Pasay City.

Read Next
FAP names winners of first Sine Panitik
EDITORS' PICK
Acer Philippines welcomes you to its first flagship store
Pope Francis to miss events due to new flare up of leg pain—Vatican
Is your company a growth champion? Stand up and be recognized!
PNP’s Covid-19 cases jump to 9,809; 52 new infections logged
More than 150 National Guard in Washington for Biden inauguration test positive for coronavirus
New Year, New Rediscoveries
MOST READ
Cavite gov’t weighs airport deal termination
Why Kris Aquino sleeps with her pearls
Parlade targets universities after fiasco with beauties
Church and bagels to go: Biden’s first White House Sunday
Don't miss out on the latest news and information.