Three heads are better than one 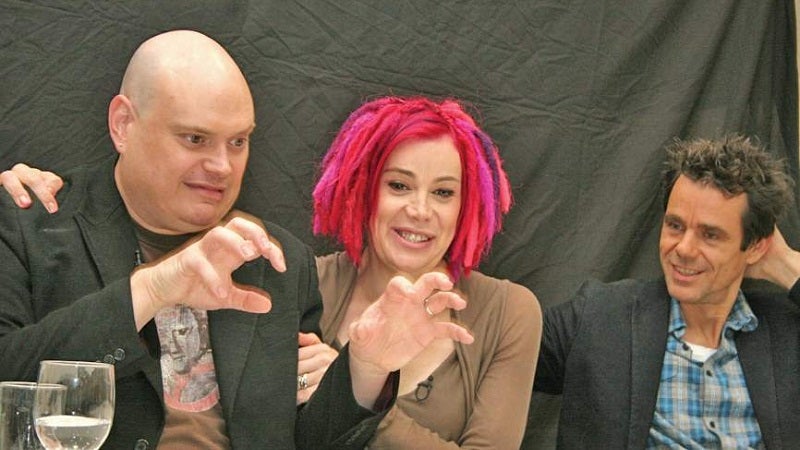 LOS ANGELES—With her rainbow dreadlocks and playful nature, Lana (formerly Larry) Wachowski quickly caught our attention even as she sat beside her fellow “Cloud Atlas” directors, her brother Andy Wachowski and Tom Tykwer.

Childlike and sweet, Lana occasionally leaned on Andy, a burly man with a shaved head. Andy smiled at this affectionate gesture (Larry had a sex change in 2008 to become Lana). The writing-directing siblings who first became famous with “The Matrix” films obviously have a deep bond.

They share a cinematic kinship with Tom, the German director whose acclaimed “Run Lola Run” was released in America in the same period (March 1999) as the first “Matrix” film.

It was fun listening to the three filmmakers because they tended to answer our questions in cinematic and script framework. “She starts crying,” Lana described Halle when the filmmakers arrived at her house; the actress thought she was going to be fired because she had been sidelined by an injury.

Below are excerpts of our interview:

For many years, you two were not comfortable in the public eye.

Andy (A): Do you think we’re comfortable right now?

Lana (L): It was after “Bound” and the first “Matrix.” We began to feel a loss of anonymity. Anonymity is a very precious and beautiful commodity in life because it allows you to access a way of being in the world, a way of being with other people that you can’t access. You are denied that if you are not anonymous. We just like hanging out with people in the park or bookstore in a way that everyone is allowed.

We thought it was a choice between making movies and giving up our anonymity. At first, anonymity was so important that we said, “We would rather be writers and not make movies.” Then Warner Bros. said, “No, no, no.” Then they said, “You cannot do press.” We said, “Okay, we’ll not do press.” And we haven’t done these (interviews). We haven’t done screenings and premieres. Then we met Tom and he’s very inspiring. David Mitchell is also very generous and kind. He tries to authentically interact and engage with people who are trying and want to understand his art. That was inspiring, too.

And for many years, I have been asked by the LGBT (Lesbian, Gay, Bisexual and Transgender) community … they’re kind and they’re friends of mine. They were like, “If you decide to … if you want to …” They were allowing me to make up my mind. But I did feel a responsibility to be more public and maybe try to dispel some of the fears that people have around people like me.

When I was a kid, there was no one in the world like me. There was no director [like me]. I can’t even think of writers [like me]. It was disheartening, very depressing and frightening. I thought, if there are kids out there like me, they will see me and say, “This part of the world is not closed.” In a way, the movie is about that… having to expand yourself to think about a world that’s beyond your personal needs and personal comfort. It’s about having courage to engage with a broader imagined future.

A: For me, I resent the fact that not only do I have to write, make and cut the movie, I have to explain it, too?

How complex and difficult was it to make “Cloud Atlas”?

Tom (T): As difficult as the creation of the film might look—and of course it was demanding—it was an incredibly joyful experience.

L: We wished that it could go on and on. 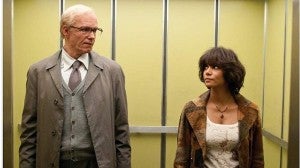 T: The movie was impossible to finance. If you talk about difficulties, the major one was putting it together.

L: Financing was definitely the hardest [part]. Not to belie the joy, but there was heartbreak in the making of this movie that seemed to challenge us all the way, right up to the place where we did not think we could possibly keep going. Then, some teenie-weenie little itty- bitty miracle would happen. We’d be like, “We must go on!” Or like the two of us would be dead and Tom would go, “Come on!”

L: A great example is, Warner Bros. offered us this domestic deal which triggered all these foreign deals. We’re like, “It’s happening!” Then we’re going to meet Tom Hanks and he’s very excited. We’re driving to meet him. We’re practicing this whole big song-and-dance to convince him to be in the movie for no money because we don’t have any money.

Just as we’re pulling in, Warner Bros. calls and, through our agent, says they’ve looked at the math and decided that they don’t like this deal. They’re pulling all of the money away, rescinding the offer. I was shaking. I heard, “Are you saying the movie is dead?” They were like, “Yes, the movie is dead.”

T: Cut to Tom Hanks coming down the stairs.

A: He’s got a cup of coffee in his hands. He’s waving, smiling.

L: Like in slow motion. I was thinking, “It’s dead.” And here’s Tom Hanks, whom we have to convince to be in our movie that is now dead. It was like, “Hi, welcome to our sinking ship.” We go upstairs and he has this poster of “2001: A Space Odyssey” on the wall, which is one of the movies that made us want to make films. And he’s reading “Moby Dick,” one of the novels that we read over and over.

We’re like, this is clearly a sign. At the end of the meeting, Tom says, “Let’s do it. I’m in. When do we start?” We’re like, nobody ever says yes in a meeting. They all [just] say, “Great meeting.”

L: It was funny because I felt like we had this broken heart. Then Tom said this unabashed, enthusiastic “Yes!” which put our heart back together. We walked away thinking, this movie is dead but somehow, it’s alive and we’re going to make it.

T: Warner Bros. miraculously came back. Many people contributed to the movie. We went to individual people in Asia, Europe and America. I mean, everywhere.

L: A multitude of drops made this movie.

T: Tiny bits, bigger chunks. People pulling out, coming back in, all these nightmares. Even during the shooting, people were saying, “We changed our mind.” We go, “What do you mean? We’re shooting! We have a deal.” They go, “Well, sue us.”

A: The financial ups and downs went right up when we started shooting. But three days later, Halle Berry broke her foot.

T: While we were into the shoot…

A: A shoot in which we had our money invested. The blood went out of our heads.

L: The shooting schedule took so long to make because all the actors were flying all over and they had to be on our unit or Tom’s unit. They’re switching makeup. In the morning, they would be doing one time period and then in the afternoon, a different one. It was like an incredible, complicated, beautiful Sudoku puzzle.

Then Halle couldn’t walk, couldn’t work. We’re going to her house and the insurance company is calling, telling us that we have to replace her. But we had no one else. When we wrote this script, our list was like, “Halle Berry.”

L: We’re driving up to Halle’s house. They’ve put her foot in a cast. We walk in the door and she sees us. She thinks we’re coming to fire her. She starts crying. We’re like, “Why are you crying?” She’s like, “Are you going to fire me?”

You worked very well together. How did you set aside your differences?

T: We were not thinking so much about the differences but rather the similarities, which are huge. We came up with the whole idea. We met and it was this kind of love-at-first-sight meeting. We sent love letters to each other. It was happening during the time period that you might remember. They made the first “Matrix” in the same period that I did “Run Lola Run.” The films came out in America in the same month. They were kind of “neighbors.” We saw each other’s movies.

We met one another and realized during one very long dinner that we were living on the same creative and spiritual planet. It was a wonderful prospect to work together.

We have diverse talents but [as far as] what we’re looking for in cinema [is concerned], we’re absolutely in tune with each other. We never really thought about our differences.

A: But there’s one thing that sets Tom apart and it was a revelation. Tom also composes his music. He’s done it for every film he’s ever made. For us, it was the difference between the world being round or flat.

L: We were former flat-earth people. We used to believe the earth was flat.

A: Tom writes all of his music before he shoots, which is incredible. We were thunderstruck when we heard that. Music is such an integral part… particularly in “Cloud Atlas,” where the music is a character. For us, we typically prep our movie, shoot, cut and then we put temp music. It has the same strange quality as putting on somebody else’s clothes.

L: It’s the most abominable aspect of making a movie, when you’re starting to really bond and fall in love. Then you take somebody else’s music and you put it on and it’s so foreign and weird.