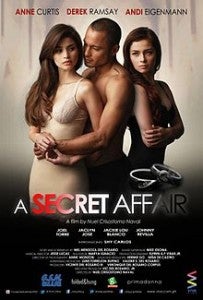 “A Secret Affair,” follow-up to last year’s box-office hit film “No Other Woman,” has started screening in select theaters in the United States, the United Arab Emirates and Saipan after opening in Manila, producer Viva Films announced.

After being shown in Saipan on October 26, the film’s next screening dates are:

Read Next
Pugad Baboy, October 29, 2012
EDITORS' PICK
Geek out at TOYCON 2022 powered by Smart Signature
House energy committee chair Arroyo bats for cheap electricity
UK’s Boris Johnson will resign, BBC reports
High inflation: Your P1 is now worth only 87 centavos
Unemployment rate up to 6% in May
High-risk pregnancy: Reducing your risk is in your hands
MOST READ
Suspect in grisly killing of missing woman in Bulacan arrested
Kim Atienza’s daughter flaunts bikini body in response to critics of her ‘revealing photos’
Japanese artist who created ‘Yu-Gi-Oh!’ found dead in the sea
FDA probes popular Filipino noodle brand for ‘high level of ethylene oxide’
Don't miss out on the latest news and information.