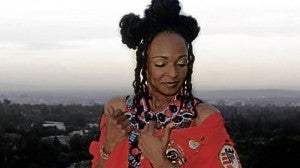 SIEDAH Garrett composed and sang “Keep on Lovin’ You” and “I’ll Remember” for the King of Pop.

LOS ANGELES – Siedah Garrett, who co-wrote Michael Jackson’s “Man in the Mirror” and sang “I Just Can’t Stop Loving You,” has composed and performed two new tribute songs to the King of Pop.

In a later interview via e-mail, the multitalented Siedah disclosed that she had penned and sang two new songs, “Keep on Lovin’ You” and “I’ll Remember,” as a tribute to the late Michael. Below are excerpts from our interview with Siedah, who remembers Michael fondly for being highly creative, for being a perfectionist and for his childlike sense of humor:

“Keep On Lovin’ You” is your answer to your original duet with Michael Jackson. What thoughts and feelings did you have as you were composing and performing the new song?

Whenever we were on stage performing the duet “I Just Can’t Stop Loving You,” it was like Michael was singing it to me. So, I wanted to write a response that would describe how I felt about him, what a difference he made in my life, and how much I appreciated the opportunities he afforded me.

Will there be other treats for Michael Jackson fans in your coming new album?

Can you share your memories of meeting Jackson for the first time? And of the last time you saw him?

After Michael and Quincy Jones accepted “Man in the Mirror,” Michael wanted to record it in a lower key that was more comfortable for him. Quincy Jones called me to come to the studio to rerecord the song. When I met MJ, I remember him being really down-to-earth. As I resang the demo in the new key, Michael was holding a video camera recording my performance. When I asked why, he responded that he loved my voice and my energy, and that he wanted to sing it just like I did.

As for the last time I saw him, I had reached out to him in 2009 when I learned he was making plans to go back on tour. I caught up with him on the phone during the Michael Jackson week on “American Idol,” four weeks before he died. He congratulated me on my Grammy win and Oscar nomination. I later saw him at his tour audition three weeks before he died.

What do you remember most about Jackson? What memories stay fresh in your mind to this day?

Michael was incredibly creative, a perfectionist in the studio and on stage. He had a childlike sense of humor. While in the studio recording our duet “I Just Can’t Stop Loving You,” Michael recorded his part, but when it came to me singing my verses, he began tossing popcorn in my face in an effort to make me mess up. Quincy Jones, not seeing this, began to chastise me for flubbing the takes. Michael, on the other hand, was just cracking up!

Can you share the story that went into the making of “Man in the Mirror”?

I was signed to Quincy Jones as one of his songwriters. He called us all to describe the type of song they needed to complete MJ’s “Bad” album. I later got together with my main writing partner at the time, Glen Ballard, and as he began to search for sounds on his keyboard, I began to flip through my lyric notebook for a random idea. The phrase “Man in the Mirror,” which I had written in the book two years earlier, just popped out of me. I began writing on that theme, and the lyrics began to flow. Within 15 minutes, we had the first verse and the chorus of the song. We split up to work on our respective assignments, Glen the music and me the melody and lyrics. Two days later, we completed the demo.

You co-wrote the Oscar-nominated song, “Love You, I Do,” which was sung by Jennifer Hudson. Can you tell us how you got involved?

I was brought into the “Dreamgirls” film project by the music supervisor Mervyn Warren, to work with composer Henry Krieger. We wrote over 20 songs for consideration. Our assignment was to provide Jennifer’s character with another way to express her love for Jamie Foxx’s character without her having to say it. It worked, and Jennifer was extremely convincing in the song as she was in the acting role itself. The song was not only Oscar-nominated; it also won a Grammy award.

You have collaborated and worked with, or sang background vocals for, other music giants and stars. Which of these talents stand out in your mind and why?

I’d have to say Quincy Jones because he introduced me to the world as a songwriter and a recording artist. He brought “Man in the Mirror” to MJ’s attention, and suggested that I be MJ’s duet partner on “I Just Can’t Stop Loving You.” Others whom I’ve been fortunate to work with include Madonna, Aretha Franklin, Ray Charles, Miles Davis, Al Jarreau, Sergio Mendes, Jamie Foxx, Sarah Vaughn, Ella Fitzgerald, Patti Austin, Sheena Easton, Chaka Khan, Natalie Cole, Roberta Flack, Dionne Warwick, The Corrs, The Brand New Heavies, Amy Grant, Barry White, Paula Abdul, will.i.am and Jordin Sparks.

What were your sources of inspiration when you wrote these two songs with Quincy Jones—“I Know I Can” (for the opening ceremony of the 2007 Special Olympics”) and “Better City, Better Life” (opening theme song of the 2010 World Expo in Shanghai)?

It was all about the remarkable Chinese people and culture, and showing them to the world in their best light.

Why is Quincy Jones “The Man”?

Quincy Jones has been able to sustain an incredible career for over six decades, remaining relevant in each one of them. Also, he insists on surrounding himself with talented people who are the very best at what they do. Knowing this, anyone who works with him wants to give him the very best. Therefore, he gets the best of the best.

Which songs by other composers do you wish you had written and why?

I wish I had written “More Than Words” by Extreme. I love the sentiment, the meaning, and how clever it is.

What are your dream projects?

I’d like to write a Broadway musical that is based on my life story. Also, I’d love to one day write and record with Prince.