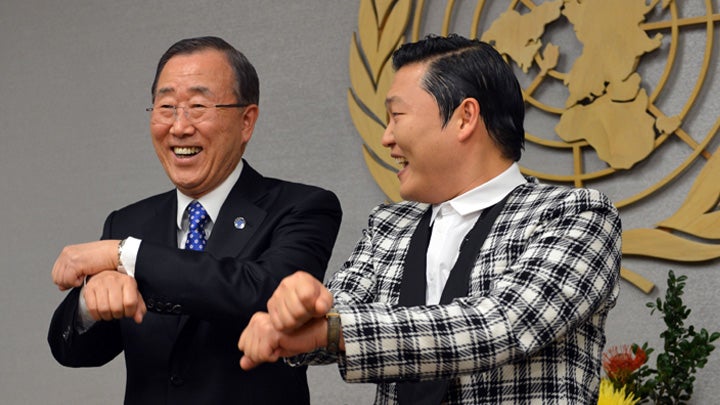 UNITED NATIONS — UN leader Ban Ki-moon had to admit Tuesday that he is no longer the world’s most famous South Korean as he came face-to-face with “Gangnam Style” rap phenomenon Psy.

But the world body’s secretary general got the bonus of an offer of a skydiving lesson from Felix Baumgartner, the first person to break the sound barrier in freefall.

Ban said he felt overshadowed by his countryman Psy, who showed off some of the wacky dance moves that have been viewed more than 530 million times on YouTube.

“I’m a bit jealous. Until two days ago someone told me I am the most famous Korean in the world. Now I have to relinquish. I have no regrets,” said Ban, who tried the Gangnam Style routine.

The pop star also heaped praise on Ban, telling reporters: “So now you have first and second famous Korean in the same building.”

“For all the Koreans he is the guy, you know, in everyone’s heart in Korea, the best among the best,” Psy said. “To be here and he knows me, even the thing that he knows me is so touching right now and he’s saying he saw my video, he counted my video views.”

Ban was also diverted from conflict in Syria and other world hotspots with his earlier meeting with Baumgartner.

“I am officially retired from the daredevil business now,” the 43-year-old Austrian told Ban, though he offered to give the UN leader a skydiving lesson.

Ban told Baumgartner how he had joined the millions who watched live coverage of the jump from 24 miles (39 kilometers) above New Mexico when the Austrian reached a claimed top speed of 833.9 miles (1,342 kilometers) per hour, 1.24 times the speed of sound.

“I thought my heart would stop,” the UN leader said, hailing Baumgartner as “the most courageous person in the world.”

“We talked about what I accomplished on October 14 and about future plans, how to inspire young people and women,” Baumgartner told Agence France-Presse after his meeting with Ban.

The former paratrooper said he was now concentrating on becoming a commercial helicopter pilot as a retirement job.

“I am going to put myself into public service as a pilot, rescuing people from mountains, as a firefighter,” he said, adding that he would work in Austria, Switzerland and the United States.

Though his jump caused mass jitters among others, Baumgartner said he has no physical scars.

“When I landed, I had a medical check and there were no problems,” he told AFP. But he is not recommending that anyone try to copy him, saying: “No, I wouldn’t. Trust me, it is difficult.”