Stung by spat over Baguio trees, Sting opts for change of venue 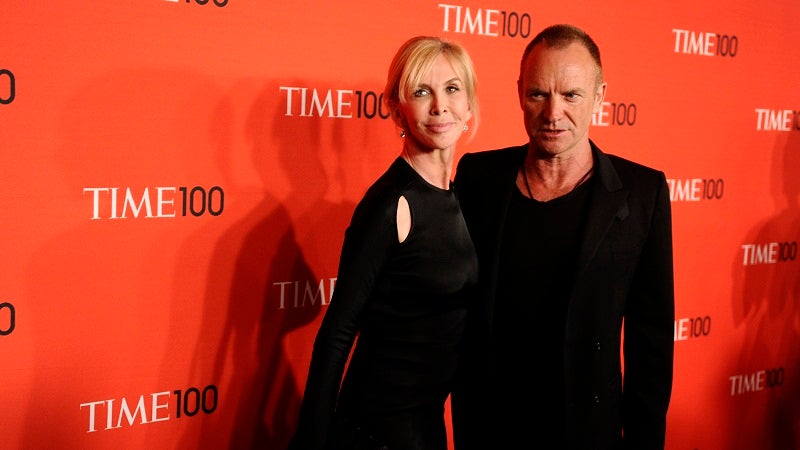 Musician Sting and his wife Trudie Styler attend the Time 100 Gala, celebrating the 100 most influential people in the world, on in this April 26, 2011 file photo, in New York. Sting moved the location of his “Back to Bass Tour” concert Saturday Oct. 20, 2012 in the Philippines following a petition by environmentalists who said the original venue is owned by a conglomerate that plans to uproot 182 trees for a parking lot and mall expansion in a northern mountain city. Sting and his wife established The Rainforest Foundation to protect tropical rainforests and their people. AP/Peter Kramer

MANILA, Philippines—The Manila leg of British singer-songwriter Sting’s “Back to Bass Tour” concert on Dec. 9 will be moved from the SM Mall of Asia (MOA) Arena in Pasay City to Smart Araneta Coliseum in Quezon City amid a spat over pine trees, it was announced Friday.

It turned out that Sting himself had asked for the transfer, after receiving a letter—addressed to a certain Alicia, said to be his US representative—written by Minnesota-based lawyer Cheryl L. Daytec-Yañgot, a founding member of the National Union of Peoples’ Lawyers (NUPL) in the Philippines and formerly the lead lawyer in two environmental cases against SM Investment Corp. and SM Prime Holdings on the plan to cut down 182 fully grown trees to expand the SM Baguio mall.

NUPL was representing Project Save 182, a group formed to help stop the cutting of the trees.

In her letter, Yañgot talked about an online petition on Facebook asking Sting to change his Manila concert venue, because the MOA Arena is owned by the SM group which Project Save 182 had sued due to the SM Baguio expansion.

The petition was signed by 393 people.

“I am worried that the petition might not reach Sting … I hope I found the channel in you. Alicia, the people of a historical city of almost half a million people are fervently praying that something can be done. Please do something. Sting said and we agree wholeheartedly, ‘If you really want to define civilization it should be a culture that doesn’t destroy its environment. If you burn down the kitchen one day and expect to eat the next, it is not even intelligent, let alone civilized,’” Yañgot’s letter said.

“[Fogel] assured me that my e-mail reached Sting,” Yañgot said in an e-mail message to the Inquirer Saturday.

In a statement, SM Prime Holdings Saturday said it was regretful that “a lot of disinformation” surrounding its Baguio mall redevelopment plan had apparently reached Sting.

“For the record, SM Baguio City plans to redevelop its facilities in order to address an urgent topsoil erosion problem covering its private property to protect the integrity of its Baguio mall,” SMPH said.

“In the process of the planned rip-rapping of the sloping area at the back of the mall, 182 trees will be scientifically earth-balled under close supervision by the Department of Environment and Natural Resources (DENR) and UP Los Baños forestry experts,” it said.

“DENR mandated that for the greater possibility of the survival of trees, earth-balling must be done at night to avail of the greater volume of moisture, compared to the hot condition during the day. These trees will be relocated, not cut, within the same SM Baguio private property, using heavy equipment and a lot of manpower,” it said.

“The redevelopment plan has complied with all applicable laws and obtained all the necessary government permits, including the DENR and Baguio government,” the statement said.

“The issue on the relocation of the trees within the privately owned SM Baguio property is pending in a Baguio court, and SM is focused on defending its legal rights,” the statement added.

There were two problems that put MOA Arena and Ovation Productions, which is mounting the concert, in a bind: First, the transition of changing venues includes replacing previously sold tickets with new ones, which would be difficult since the Arena and Smart Araneta have different seating capacities, and there may be possible refunds; second, how to inform the public about the real reason for the venue change.

At past 1 a.m. Saturday, the international news agency Agence France Press (AFP) filed a report on the change of venue, quoting Sting’s official website, sting.com, as well as the MOA Arena management.

“Somebody misled the ‘Englishman in New York’ over the venue,” MOA Arena general manager Arnel Gonzales told AFP, a reference to one of Sting’s hit songs. “Gonzales said that while the MOA Arena and SM Baguio are sister companies, the concert venue had nothing to do with [the tree-cutting issue] … It’s something we did not expect.”

Sting.com’s announcement focused on details of ticket exchange, refund and ticket purchase for those who will watch the concert. It avoided any mention of the Project Save 182 petition.

A Baguio court issued a temporary environmental protection order against SM in April. Early this month, the court heard evidence presented by Project Save 182 and SM, which would determine whether the protection order should be made permanent.

Sting, former front man of “The Police,” is known for supporting human rights and environmental causes. With reports from Vincent Cabreza and Desiree Caluza, Inquirer Northern Luzon, and AFP